Amie Jallow, a resident of Brikama, was recently cross-examined in the murder case involving one Lamin Njie, at the Special Criminal Court in Banjul before Justice Emmanuel Nkea.

Ms Jallow told the court that it was the deceased who first attacked the accused person, and stoned him with a charcoal pot containing fire and the hot charcoal pot hit the left part of the chest of the accused, which resulted in a big injury.

She also said she was present at the scene of the crime, and further stated that the accused gave a blow to the deceased on the chest after the latter had stoned him with the charcoal pot containing fire.

The deceased fell down and did not get up until he was pronounced dead, Ms Jallow told the court. 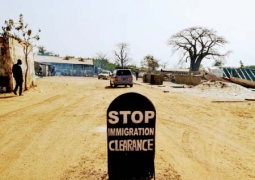