Kebba Bojang and 19 others were recently arraigned at the Brikama Magistrates’ Court charged with conspiracy to commit felony and stealing.

They all denied the charge and were each granted court bail of D50,000 with two Gambian sureties.

According to the particulars of offence on count one, on 4 September 2012, at Mandinary village, in the Kombo North District of the West Coast Region, Kebba Bojang and 19 others jointly conspired to commit a felony, to wit stealing.

The particulars of offence on count two read that on the same date and place, they jointly stole 53 gallons of gasoil valued at D49,000, being the property of Gam-Petroleum.

The case, presided over by Magistrate Hilary Abeke, was adjourned till 16 January 2013, for hearing. 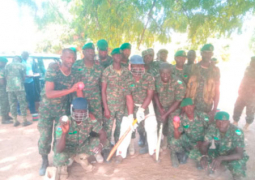