One Jainaba Manneh, a resident of London Corner, recently testified as the third prosecution witness (PW3) in the murder case involving one Muhammed Sonko, at the Banjul High Court before Justice M. Abdoullah.

Ms Manneh told the court she is a petty trader and knew both the deceased and the accused person.

She said that on the day in question she was sleeping when the deceased knocked at her door asking for dinner and when she opened the door, the deceased asked her about the accused.

PW3 said further that the accused later arrived with insulting language against the deceased, and they started fighting, but she could not separate them.

“The accused told Pa David Demba that ‘I told you if I find you here I will kill’. The mother of the accused started crying,” she said.

Still testifying, PW3 said she sent a child to call one Edward Jatta, the friend of the deceased, but by the time Edward arrived the fighting was very tense.

“The accused also attacked Edward, and the elder sister of the accused gathered sticks and gave it to the accused,” she explained.

PW3 further adduced that Edward took the deceased to the latter’s house where the accused again attacked the deceased, but Edward and the deceased locked themselves in the house.

The deceased was taken to the hospital and later to the police station in London Corner, she said. 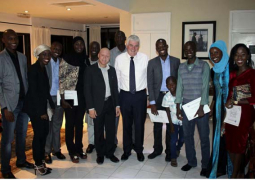