What is holding the bills?

Tabling the proposed controversial amendments to the Elections Act and the 1997 Constitution at the National Assembly has again been deferred.

Deliberating on these bills, together with two others, was called off at Tuesday’s sitting of the National Assembly. We understand the bills will be tabled on 7 July.

Our readers have been asking what has been holding back the tabling of the bills to amend the Elections Act and the 1997 Constitution. There has been a lot of speculation.

What is clear is that some of the proposed amendments to the Act and the 1997 constitution have created some serious debate, as seen in the press.

Concern has been expressed about, for instance, the proposed amendments that provide for a million dalasi registration fee for a political party, and expansion of situations for application of death penalty.

Under the proposed amendment to the Elections Act – the principal law that governs the conduct of elections - the registration fee for a political party increases from not more than D5,000 to D1 million

It also obliges presidential candidates to pay D1 million in order for their candidature to be endorsed by the Independent Electoral Commission (IEC).Previously, it was D10,000.

As regards the proposed amendment to the 1997 Constitution, it affects Section 18 (sub-section 2) of the constitution, which provides for application of death penalty.

The proposed amendment seeks to make the death penalty applicable as well in circumstances other than where there is actual violence or administration of toxic substances resulting in death.

These and other proposed changes to the law have sparked serious debate as Gambians home and abroad, ponder the implications.

What we can say is that our National Assembly members have the onerous responsibility to be guided by only the supreme national interest, whenever they come to deliberate on the said amendments next week.

''Truth is confirmed by inspection and delay; falsehood by haste and uncertainty.'' 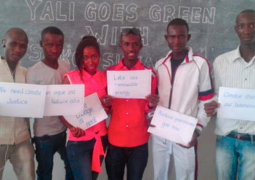