What a bad omen: Xenophobia against Africans in Africa

The wave of deadly attacks against African migrants in South Africa is, indeed, a cause for concern to all not least The Gambia government, which that has issued a strong statement condemning such attacks against our African people.

These recurring attacks against African migrants and their property are a source of deep worry, because it is an indication of how the citizens of the rainbow nation are full of hate for and resentment toward other black African brothers and sisters.

What makes the attacks in South Africa even more alarming is the fact that black Africans are mainly the target.

This act is against the very cause the entire African continent fought for to bring Apartheid to its knees, in order to make sure all South Africans live in dignity irrespective of race or ethnic group.

But it is disheartening to see how South Africans are hurting their face in spite of their nose.  Certainly, one of the mainstays of the African economy is intra-African trade - specifically trade between South Africa and its southern African neighbours like Angola, Botswana, Namibia, Zambia, and Zimbabwe as well as other African countries.

Even if it is true that other African nationals are taking most of the much-needed jobs in South Africa, then something is fundamentally wrong in the country.

Whichever of these is true in South Africa, attacking foreigners, using them as the scapegoat for policy issues, will not solve their problems; it’s the root cause of their economic situation that should be diagnosed and found answers to.

Besides, attacking other citizens of Africa in South Africa will inflict more pains on South Africans themselves than they think.  South Africans are also in other parts of Africa where they are gainfully employed and benefiting their families back home. They could also be targeted and harmed or their businesses destroyed by nationals of those countries, as has been happening in Zambia or Namibia a few days ago.

In addition, the xenophobic attacks in South Africa are against the very ideals and principles of African unity.

The emergence of the African Union was premised on the felt need for stronger regional integration in Africa.

But how do we achieve greater unity and solidarity among Africans when nationals of one African country are taking up weapons against their fellow Africans.  How do we accelerate political and social-economic integration of the continent if African citizens can be sent out from country for ‘taking all our jobs’.  How do we promote peace, security and stability on the continent in killing our fellow Africans?

Just like the Gambia government and all those concerned institutions and individuals have stated, we also denounce the xenophobic attacks in South Africa in the strongest possible terms and call on the South African government to take an equivocal stance against this menace.

The South African government should not just be releasing statements, but should condemn and prosecute all those who incited the violence.  This is essential to maintain law and order, as well as protecting other nationals in that country.

“Xenophobia manifests itself especially against civilizations and cultures that are weak.” 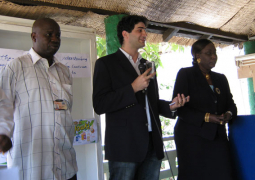