We will bounce back, Gambia Sissohore vows 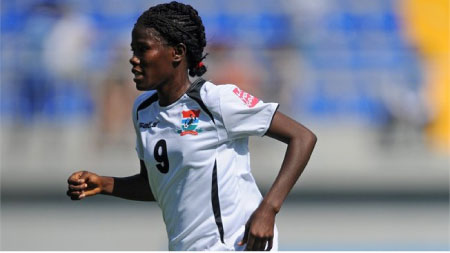 Gambia have experienced the toughest of debuts at a FIFA women’s competition at Azerbaijan 2012. Beaten 11-0 in their Group B opener by Korea DPR, they subsequently had their hopes of survival extinguished on Tuesday when they went down 6-0 to the USA at Baku’s Dalga Arena.

When the final whistle sounded Buba Jallow’s players trudged disconsolately back to the dressing teams, virtually all of them in tears, with the exception that is of midfielder Sainey Sissohore, who summoned up a smile as she made her way off the pitch.

The youngest member of the Gambia squad and the youngest player in the tournament as a whole, having only turned 13 in December last year, the No 9 saw no reason for disappointment.

True, the Girl Scorpions have lost both their games and conceded 17 goals in the process without scoring any. Yet these were, after all, the nation’s very first matches in a FIFA women’s finals at any age category and against two of the tournament’s strongest teams.

“After the first game our coach told us that this is just football,” said the teenager. “You either win, you lose or you draw, and that’s that. We lost and we have to accept it. It’s not easy to get to the World Cup because the qualifiers are very tough.

“The way I see it this is a great opportunity for us and we have to look at it as such,” she continued. “This is only Gambia’s first time here and we did what we could. The USA have reached the finals every time and they’re getting better and better. This is our first step. We’re going to grow too and we’ll be back.”

Remarkably, Sissohore only started to play football this year. She was discovered in a school tournament by assistant coach and former national team player Choro Mbenga, who formed part of Gambia’s first ever women’s team in 2006. It was the youngster’s skill and discipline that caught the eye, characteristics that Mbenga, who now coaches a professional team in Gambia, believes go hand in hand.

“When I saw her play for the first time, I was immediately struck by the fact that she was left-footed, which is pretty rare in women’s football,” said Mbenga. “I could also see that she was very disciplined, that she really applied herself. If she continues to do that I’ve got no doubt that we’ll see her in the U-20 World Cup in the next four years and beyond. She’s a natural talent and we did what we could for her: we gave her a taste of this level of football. Now it’s up to her.”

While there are a lot of teams that tend to take young players along to big tournaments to let them gain experience from the bench, Sissohore has been involved from the off at Azerbaijan 2012. After coming on as a substitute in place of Penda Bah in their opening game against the North Koreans, she was given a starting place against the Americans.

Coach Jallow’s decision to back the young star was vindicated in the opening minute of Tuesday’s game, when she collected possession in the midfield, sped off in the direction of the USA goal and nearly caught out keeper Jane Campbell with a firm shot.

“She’s a very promising player,” enthused Jallow. “She’s skilful and determined, and she almost scored in the first minute. She has the makings of a star but she needs to stay focused.”

Luckily for both him and Gambia, focus is one thing the tyro is not lacking. “When I’m not playing I like watching matches on TV,” she said. “I watch Barcelona a lot and I love [Lionel] Messi and [Andres] Iniesta. I’m a fan of Brazilian women’s football too, of Marta and Cristiane. I used to dream about playing football and I’d picture the fans in the stadium and all that. When you play nice football, people cheer and get excited. I want to be part of all that.”

With players like Sainey Sissohore fighting for the cause, the future can only be bright for Gambia.