It is obvious that there will be always some amount of debts incurred by any economy, be it domestic or international, especially for low-income countries like The Gambia.

What is alarming, though, is the manner in which the funds were withdrawn and what they were spent on that leaves a lot to be desired.

This speaks volumes as regards the circumstances in which these monies were withdrawn.

While we are yet to know the purpose of the withdrawals and how the monies were spent, the revelation sends a bizarre signal that a lot of resources had been used amiss, and whichever destination some of those resources had gone should be traced.

Resources or accounts from such public institutions as the Social Security and Housing Finance Corporation (SSHFC), Gamtel and the Carnegie Mining project were gravely affected, and said to be a reflection of the mismanagement of the Gambian economy by the APRC government.

While the Barrow government should obviously continue to focus on how to improve the economy and register development for the people, it is also of interest that some of the alleged missing funds are traced to know their destination, so that all would be in a position to know whether this withdrawals were used wisely for national purposes or were siphoned into the personal accounts of individuals.

According to the Finance and Interior ministers, these withdrawals had “destroyed” the Gambian economy; hence their use and destinations must be investigated to recover some of them and put into good use for national development.

Meanwhile, we are alarmed by the revelation by the authorities directly concerned with our country’s financial status.

“The destinations of our financial resources must be traced.”
The Point

"Still Confident My Team Will Bounce Back'' -Lang Kah Bojang 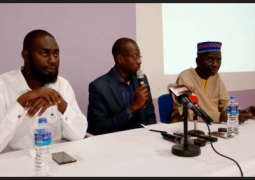