The Point has been reliably informed that the former Director General of the Gambia Prisons Services, David Colley, who was arrested sometime ago is still detained by officials of the National Drug Enforcement Agency (NDEA).

Colley who was, until his arrest and detention, working at the NGO affairs unit of the Ministry of the Interior after being moved from the prisons service, was said to have been arrested a week ago for yet to be known reasons.

“He (David Colley) is still under our custody,” ASP Abdoulie Ceesay NDEA public relations officer confirmed to this paper yesterday, but did not elaborate further as to whether any charges have been preferred against him.

Colley served as prisons boss for many years, before he was arrested on 5th June 2007, sacked, detained and subsequently charged with stealing a 5.5 KVA generator and D27, 000.

He was later acquitted on the charge of stealing D27, 000, but found guilty of stealing the generator, following a legal battle that lasted several months.

He was subsequently ordered to pay for the generator, and fined D3000. 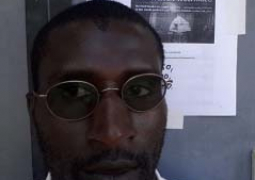