WANEP-Gambia on International Day of Peace 2014

The West Africa Network for Peacebuilding (WANEP) joins millions of people around the world to celebrate the 2014 International Day of Peace.

The relevance and importance of this year’s theme for the celebration,“Rights of Peoples to Peace” cannot be overemphasized given the current peace and security landscape of the region.

The theme reinforces WANEP’s belief that peace is a fundamental human right that cannot be compromised under any circumstances.

In this wise, there is need for collective and holistic efforts involving governments and its agencies, intergovernmental and civil society organizations, to ensure that people live in dignity, peace and acceptable standards.

Since January 2014, WANEP through its early warning system has been monitoring the West African Region and the diverse human security challenges, including violent extremism and religious fundamentalism, agro-pastoralist conflicts, communal conflicts, electoral tension, targeted killings, among others, that continue to threaten the region.

The outbreak of the Ebola viral disease, especially in the Mano River countries of Guinea, Liberia, Sierra Leone and recently in Nigeria has claimed over 2000 lives and continues to pose a serious risk of becoming widespread due to poor hygiene living, weak health facilities and porous borders, with devastating consequences on a region already challenged by other human security issues.

The insecurity challenges in Nigeria are further compounded by renewed agro-pastoral conflicts in the northern states,which have claimed hundreds of lives and the persistent attacks on innocent civilians, security agencies and infrastructures bythe Boko Haram insurgents alsoin the northern region.

On April 14, over 200 schoolgirls were abducted from Chibok Community in Borno State, Northern Nigeria, and till todate, their whereabouts remain unknown though few of the girls have managed to escape.

Ghana’s long peace and stabilityhas also been tested in recent times in relation to cases of perceived targeted killings and community tensions in the north, leading to loss of lives and properties.

Electoral tensions were witnessed in the pre and post elections phase in Guinea-Bissau, which took place in April in what was regarded as a major platform for the restoration of constitutional rule.

However, the tension abated with the unanimous acceptance of the results and the inauguration of the elected president.

In responding to these and many more challenges in support of the ECOWAS Commission and its member states, as the official CSO partner to ECOWAS in peace and security and particularly in the operationalization of the Regional Early Warning Mechanism (ECOWARN), WANEP carried out the following activities:

Recommendations were also proffered on how the PSC and CSO interactions can be enhanced and sustained to respond effectively to the many peace and security challenges;

WANEP and the Kofi Annan International Peacekeeping Training Centre (KAIPTC) renewed another five-year Memorandum of Understanding to reaffirm their collaborative commitment to the promotion of peace and stability in the region.

This renewal has taken the partnership between WANEP and KAIPTC to other aspects of peace and security in support of the AU and ECOWAS agenda on the continent;

An assessment of the ECOWAS protocol on Democracy and Good Governance and how it has responded to the challenges of transitions in the region;

Training of representatives of Gender and Women’s ministries in the region in monitoring and evaluation skills to enhance the tracking of the implementation of UNSCR 1325.

As the world celebrates the International Peace Day, WANEP commends the efforts of the Economic Community of West African States (ECOWAS) and its member states in responding to the many security challenges of the region,and its collective approach in managing the outbreak of the Ebola viral disease which continues to pose a worrisome human security situation; and to ensure the rights of peoples to sustainable peace.

WANEP remains committed within the mandate of its work at supporting West African governments for the diverse measures they continue to take to prevent and curb the spread of the virus including the declaration of state of emergencies, the prohibition of public gatherings and confinement of affected communities and as they respond and take ownership of their challenges.

WANEP-The Gambia will commemorate International Day of Peace 2014 by conducting an Ebola sensitization and awareness campaign as Ebola is a threat to peace.

The populace needs to be aware on how to prevent contacting the virus thereby maintaining the peace and stability of this peace-loving nation. 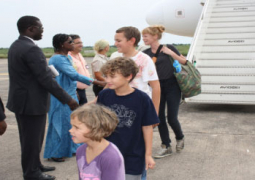