A two week Olympic level one training course for volleyball coaching security service and regions is currently underway at the Independent Stadium in Bakau.

The training organised by the volleyball association, and funded by the International Volleyball Federation which its aim is to train and equip the coaches in the game of volley ball

The training course brought together 22 participants both male and female.

Speaking at the opening ceremony the president of the volleyball association Mr Musa Cassa Taal, said that the training course is funded by the international volleyball federation with the aims and objectives of equipping participants with skills and technics in modern coaching.

He reveals that the course director comes from the federal Mr Kurt Radde and the course instructor come from Syhells Mr Bendict Denis.

He futher revealed that course is an intensive course started from 31stof March 2008 to . 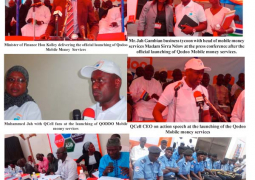