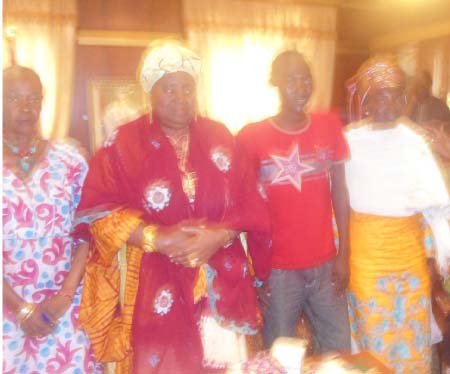 The Vice President of the Republic of The Gambia and Minister of Women Affairs, Madam Dr Isatou Njie-Saidy, on Friday took delivery of Steve Biko and Brufut-based Gilkock Academy young starlet Bubacarr Chatty in her office at the State House.

The 14-year-old rare talent returned home from the Indian capital of Delhi on Thursday where he underwent a successful operation on a career threatening heart ailment that interrupted his active and excellent performance in football.

The country’s number two, who began her significant speech by welcoming the entire delegation to her office, showered praises on the Indian treatment company called Heal & Bliss, who did a successful operation on The Gambia’s gifted talent Chatty sincerely regarded as a future superstar by Jammeh E.K. Bojang, secretary general of the Gambia Football Association.

Dr Njie-Saidy hailed the Indian people for their "generosity" in choosing The Gambia for such a decent project.

"As government, we must encourage South-West cooperation because we have similar tradition like you (India)," she said. "We have to understand our socio-cultural operation and know our country and that is why India is well known in their cultural values."

The eloquent vice president, who also joined the deputy permanent secretary in heaping praises on the Ministry of Youth and Sports and its minister, Sheriff Gomez, for bringing to the attention of the National Assembly and the Indian people Bubacarr Chatty’s health situation.

Madam Njie-Saidy, who also urged the Indians to take maximum advantage of The Gambia’s great potential, underlined President Jammeh’s strong commitment to the wellbeing of its citizenry.

Kumba Conateh Nam, deputy permanent secretary at the Ministry of Youth and Sports who led the delegation to the State House, said she was honored and proud to present to the vice president Babucarr Chatty, The Gambia’s future superstar, who has just come to the successful end of his surgical operation and treatment.

She used the opportunity to express profound gratitude to her boss, Minister of Youth and Sports Sheriff M.L Gomez, whom she said was the inspirational figure behind this courageous initiative, with the help of other great contributors like Kemo Ceesay of Steve Biko, and the Gambia government in particular.

Also in attendance at the nation’s highest office (the State House) was Jammeh E.K. Bojang, secretary general of the Gambia Football Association (GFA).

He told the gathering that the GFA was very much worried about the health condition of Bubacarr Chatty prior to the India trip considering the type of disease he was suffering from, saying: "We can’t give words to express our happiness to the Gambia government and the Indian people for saving the life of a footballer who has the talent to be like Samuel Eto’o and Didier Drogba in the near future.

Kirit Sobti, managing director of Heal & Bliss Surgical Company in India, reflected on the day Chatty was received at the Pericardiatecony Hospital with a serious heart complication and tuberculosis.

Sobti, whose Heal & Bliss Company focuses on youth empowerment projects including agriculture and solar energy system, said: "When Bubacarr Chatty first arrived in India, he was very sick and also had tuberculosis but he is well and okay now after a sound surgical operation was done on him in one of India’s best hospitals."

After successfully undergoing a 9-day surgical treatment on his heart where the outer cover of the pericardial was removed at the Pericardiatecony Hospital in Delhi, Chatty, who was once invited to the Gambia national U-20 team for a trial, is confident that he can resume intensive training saying he would start from where he stopped, while still nursing his ambition to play professional football at the highest level, such as international leagues and world competitions.

Sheriff M.L. Gomez, who was profoundly credited for coming up with the idea of evacuating the youngster for overseas treatment, was said to have facilitated the project while in Delhi for the 2010 Commonwealth Games. His magnificent contribution towards the proposal was widely recognised during the State House meeting.