The vice president represented the Gambian leader at the event, held at the landing station at Sukuta next to the Speed Petrol Station.

In her launching statement on behalf of President Yahya Jammeh, the VP said it is unfortunate that Africans have been dependent for decades on secondary and alternative routes for our international communications through other operators in the market, mostly in the developed world.

According to her, the introduction of ACE is a means to empower and liberate African countries from such dependency, by linking them directly to the global telecommunications infrastructure; thus availing African countries the opportunity to connect directly and exchange traffic in a fair, smooth, efficient and effective manner.

The vice president said that it is an honour for the country to be selected to host this unique milestone and major event in the advancement of telecommunications in Africa.

“Therefore, I convey profound gratitude and appreciation to ACE parties for choosing The Gambia as the venue for the launch of the historic submarine cable system.

“We are told that there are four segments, and three of them are being launched here in The Gambia. It is in this regard, therefore, that we applaud the initiative, as well as resourcefulness of France TELECOM and the consortium of sixteen operators from 23 countries that have undertaken to administer this timely project,” the Gambian VP said.

The seventeen thousand kilometers long submarine cable system aimed at connecting regions that span from France to South Africa will undoubtedly have a closer impact on hundreds of millions of lives across the globe, she continued.

“It is fascinating to observe that ACE will crucially facilitate communications within our sub-region and, by extension, contribute to realization of the African Union Programme on infrastructure development in Africa as agreed by AU heads of state and governments in Addis Ababa in January 2012,” she said.

The ACE project will additionally create the opportunity to modernize and enhance our telecommunications infrastructure for our effective participation as a continent in the global information society, as well as the knowledge economy, she went on.

“Relating this development into our context, the project also is fitting in complementing and supporting my government’s vision to transform The Gambia’s communications infrastructure into the latest state-of-the-art technology,” she stated.

VP Njie-Saidy, therefore, thanked all those who participated in the successful implementation of ACE.

The permanent secretary at the ministry of Information and Communications Infrastructure (MoICI), Nancy A. Niang, said the ACE submarine cable is a system that will provide direct submarine cable connections to seven African nations namely, Equatorial Guinea, Liberia, Guinea, Mauritania, Sao Tome and Principe, Sierra Leone and The Gambia.

According to her, the launching in The Gambia was to launched segments 1, 2 and 3, adding that the fourth segments from Sao Tome and Principe to South Africa will launched in early 2013.

Meanwhile, the members of the consortium that formed The Gambia Submarine Cable Company are the Gambia Government, which owns 19 percent, of the shares, The Gambia Telecommunications Company with 20 percent, Qcell 16 percent, Africell 15 percent, Gamcel and Comium each 10 percent whilst the Internet service providers; Netpage and Unique Solutions share the last 10 percent, that is, 5 percent each and the total value of the shares is US 25 million.

Other speakers included the ACE management committee chairman, Yves Ruggeri and Dr. Edmund Katiti from ECOWAS-NEPAD e-Africa Program, who all spoke at the ceremony. 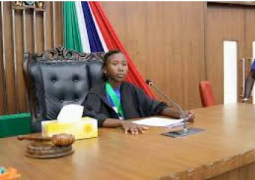