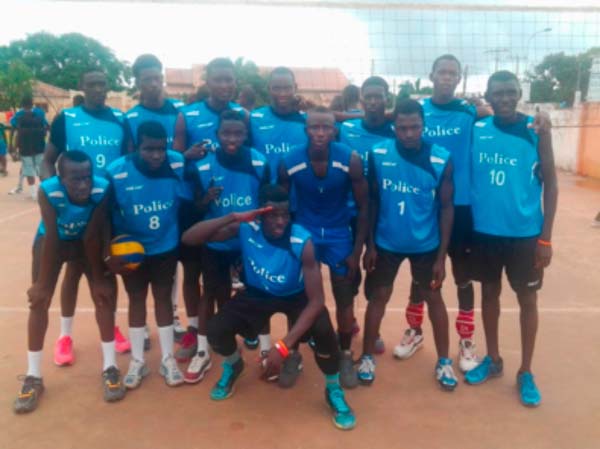 Interior volleyball club imposed a double victory over Brikama on Friday in Banjul as they beat the Sateba team straight sets in both genders.

The police men needed only 78 minutes to record a 3-0 sweep over Brikama and make a perfect comeback after conceding defeat to Serrekunda East last weekend.

Abdoulie Sey and Ahmed Tijan were the top scorers in the game while middle blockers Ebrima and Jahara both added 10 points as Interior won 25-15, 25-17, 25-20.

One of the league’s youngest female players Fatou Sillah, fondly called Germano, at age 14, was the highest scorer of the game with 18 points,drnking through the Interior block, she recorded 15 spikes but her dominance could not pave way for her team.

On Saturday, Serrekunda East nearly got the biggest shock in the season after Inventing lose ratio against the Gambia Armed Forces men team at the Fajara Barracks.

Early on in the first set, SK East were the ones who posed the threat, and indeed scared their opponents.

Without Sainey Jawo, Modou Njie and Kebba Ceesay Serrekunda East are still a force to be reckoned with.

Impressive teamwork allowed the visitors to dominate by 10-5, with Siaka Bargie reading her teammates well, delivering accurately for spikes to be sent spinning to their opponents.

A time-out was called by GAF in hopes of recovering the set.

Serrekunda East showed their defensive prowess with a dig, preventing the ball from reaching the ground and settled the first set.

With two sets in the bag for both teams, the coaches knew it was their last shot, and a fight they did.

The deciding set was followed with great rally that left even spectators gasping for air, as both teams displayed superb spikes, blocks and saves. The point eventually went to GAF, who won by registering 15-12 to sit top on the national standings.

The other Sunday fixture between Gamtel/Cel and Kotu was called off because Kotu did not appear at the ground thus the 3 points were giving to Gamtel/cel.