Muhedeen Touray sued one Omar Baldeh at the Kanifing Magistrates’ Court for his failure to procure a visa for him after he was paid for the service.

Muhedeen Touray testified on 25 July 2013 before Magistrate Jobarteh, telling the court he gave 540 Euros to Omar Baldeh to procure a visa for him but failed to do so.

He said the transaction took place in March 2013, adding that he demanded for a refund of his money but the defendant, Omar Baldeh, refused to give him back his money.

The plaintiff told the court that he phoned the defendant on several occasions but could not reach him.

Mr Touray adduced that one day, he was able to get the defendant on the phone but he told him not to bother him about his money.

He posited that he went to the defendant’s home in the morning with a police officer, adding that the defendant was arrested and taken to Manjai Police Station.

Mr Touray said he told the police that he gave the defendant 540 Euros to procure a visa for him but failed to do so, adding that the defendant refunded him 300 Euros.

He adduced further that he told the police that his passport was with the defendant, who said the passport was in Banjul and would go for it.

Touray added that the defendant brought the passport the following day to the police with 50 Euros, but he rejected the 50 Euros and collected the passport.

He testified that the defendant owes him a balance of 240 Euros.

The defendant failed to appear in court on 25 July and the case was adjourned till 22 August 2013, for cross-examination. 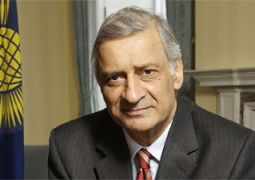