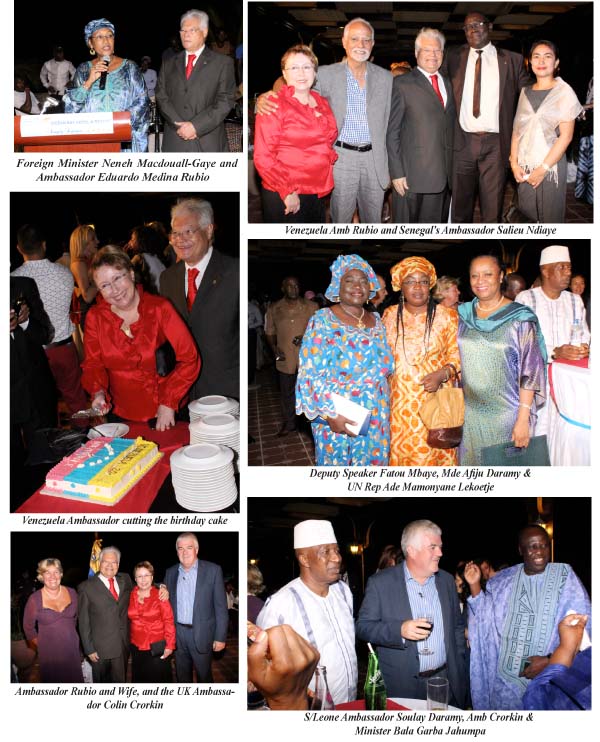 Officials of the Venezuelan embassy in The Gambia together with members of the diplomatic and consular corps and senior government officials on Tuesday converged at a hotel for a cocktail reception in celebration of another independence anniversary of Venezuela.

Speaking at the independence anniversary on 19 April, Eduardo Medina Rubio, Ambassador of Venezuela to The Gambia, said the diplomatic relations between Venezuela and The Gambia began in 1974.

But since 2006, the relations has been growing and strengthening more and more, he said.

Venezuela received more than 160 Gambian students in different areas of academic training in higher education, since 2007.To date, more than 100 have graduated and are already working in The Gambia.

Also, with the financial assistance from Venezuela, the University of The Gambia concluded the building of a new science department with modern infrastructure.

The ambassador further pointed out that 34 Gambian children were operated successfully in the children’s cardiac hospital in Caracas.

In the field of basic education, the Embassy of Venezuela under the programme ‘Support a School in Africa’, of the Office of the Vice Minister for Africa, provide school supplies to children, teachers and to the school itself.

Ambassador Rubio noted that the National Assemblies of both countries already approved an important agreement of cooperation in the area of transport and civil aviation to establish direct flight Caracas-Banjul and Banjul-Caracas.

“We have agreements of cooperation in the field of energy, tourism, health, culture, agriculture, in tax and custom matters, and a memorandum of understanding on information and communications,” he said.

He noted that Venezuelan President Nicolas Maduro understands the need to establish cooperative relations with the countries of the South and particularly with African countries.

“This means that we can support with our strengths to reduce weakness, and develop activities of mutual interest, as equal parts,” the ambassador said.

Neneh Macdouall-Gaye, minister of foreign affairs of The Gambia, said the friendly relations that today exist between Venezuela and The Gambia have been built and nurtured by the Gambian leader, President Yahya Jammeh, and his late Venezuelan counterpart, Hugo Chavez.

“Just like the many countries of the South, the freedom and liberation of our countries have come at a great price and through the heroic leadership of revolutionaries like Simon Bolivar whose vision of independence has motivated many others in their struggle for independence in Africa, many African leaders have been inspired in their struggle to end colonialism and cut the chains of neo-colonialism in the continent.

“I wish to convey in solidarity with the government and people of the friendly Bolivarian Republic of Venezuela, that the Islamic Republic of The Gambia is opposed to terrorism and the incitement of chaos in every country.We stand firm in our belief in the non-intervention in the internal affairs of states for the purposes of peaceful coexistence of all states.

“Beyond our shared values, the Islamic Republic of The Gambia and the Bolivarian Republic of Venezuela have further extended and strengthened our bilateral cooperation in areas encompassing all sectors of government, namely health, education support and capacity building, transport cooperation etc. and I wish to seize this opportunity to renew to Excellency Rubio of my sincere commitment to work with you for the broadening and deepening of our bilateral relations for mutual benefit of our two peoples.”

Who is responsible for collecting market garbage?