Following the award conferred on Pap Saine Co-publisher and Managing Editor of The Point newspaper in honour of his courageous work for press freedom, by the International Press Institute in Vienna, The Point yesterday went out and about to gauge the reactions of some media chiefs in the country on the prestigious award.

The International Press Institute in Vienna, Austria, on Thursday 8th July named Pap Saine as an IPI World Press Freedom Hero in honour of his courageous work for press freedom. Pap Saine is the Co-publisher and Editor of The Point, and the dean of Reuters? correspondents in West and Central Africa.

Pap Saine is the third journalist from West Africa to be named an IPI World Press Freedom Hero, after Kenneth Best of Liberia and Freedom Neruda of the Ivory Coast.

Mr. Saine will be one of 60 World Press Freedom Heroes honoured in a ceremony to commemorate IPI's 60th year of defending press freedom worldwide, at the IPI World Congress in Vienna and Bratislava, in September 2010.

Below we reproduce the reactions of some of the media chiefs in the country, the Gambia Press Union and Reporters Without Borders, a body working for the interest of journalists based in Paris, France.

Reporters Without Borders
Dearest Pap,
Again, I would like to send you all my congratulations and those of all the staff at Reporters Without Borders!! We are both glad and very proud of you!!
This award is in recognition of your good work and commitment. It is the best thing that could happen. All the best. Ambroise, Pierre Head of Africa Desk RSF.

Bai Emil Touray - Secretary-General, Gambia Press Union
The award in my view is in recognition of his contributions to the promotion and defence of freedom of expression in this country. This is owing to the fact that he has gone through difficult times, especially in the period 2009. Unlike other journalists, who felt that they were intimidated or harassed and had to subsequently flee the country, Pap Saine decided to stay in this country and continue his work as a journalist, and to participate in the promotion of free expression and the consolidation of our democracy.

I believe this award will go a long way in inspiring and motivating young and upcoming journalists in their quest to promote good governance and democracy. Democracy, in my view, is a salient value and genuine democracy cannot be achieved in the absence of free expression and free speech. As a result, I believe that an enabling environment should be created to allow journalists to do their work effectively and professionally, without fear of any reprisal. I enjoin the young and upcoming journalists to do their work professionally without fear or favour.

Madi K. Ceesay - MD and Editor Daily News
Really, it is very encouraging that somebody somewhere in Vienna can look at someone as far as The Gambia and give him an award in recognition of his work. This is a plus not only for Pap Saine, but all Gambian journalists as a whole.

We at the Daily News newspaper are proud of Pap Saine, and encourage him to continue the good work that he continues to do. Knowing Pap Saine, since he joined Radio Syd to the then Senegambia Sun, he has really done a lot for the development of the Gambian media. He has brought in a lot of transformation to The Point newspaper, and I urge the young and upcoming journalists to be committed to the profession, as this is the only way they can become true professionals.

Once more, I wish to congratulate Pap Saine and the management and entire staff of The Point newspaper for the award, and wish them good luck.

I want to congratulate the people who have been awarded. Pap Saine has been awarded, and Sam Sarr has been nominated for an award. This alone is an indication that someone somewhere has recognised their efforts. I hope and pray that The Gambia continues to be a peaceful country, because the country has registered rapid development within a very short period of time. I congratulate Pap Saine and Sam Sarr for the award, and hope that they keep up the good work.

Swaebou Conateh - Publisher & Editor Gambia News and Report Magazine
I am very happy about the award, and I think that all of us working as journalists in the country are proud that such an important award has been awarded to Pap Saine in recognition of his work.

The tradition of The Point newspaper since the time of the late Deyda Hydara has not been forgotten by the international community, and this good work is today being continued by Pap Saine. We congratulate Pap and wish him good luck.

Pap Saine's international award emanating from the International Press Institute as one of the 2010 World Press Freedom Heroes gives me the opportunity to congratulate, while encouraging him as a brother and colleague for being the militant of social cohesion, peace and development he has proven himself to be.

It goes without saying that with such kind of international recognition, The Gambia as a sovereign state will be seen and given its seat as a haven of countries that have a say in the running of the world, thanks to the respect for human values.

With this award, I want to congratulate the entire management and staff of The Point newspaper, Reuters and all those flag-bearers of responsible journalism, and the partners in development, who have made it happen.

George Christenson - Radio 1 FM
Pap Saine is an icon of the media and journalism fraternity in The Gambia. Whatever international award he gets, we in The Gambia know who he is and what his value is to us here. It is good that he is recognised internationally. My best regards to Pap Saine.

Peter Gomez - West Coast Radio
I am very happy and proud of Pap Saine, and the entire management and staff of The Point newspaper. It doesn't surprise me personally knowing how professional Pap is. As a professional, this is what we can expect from Pap Saine.

No matter how difficult the situation is, this man will always do things professionally. I also believe that it is too late for him to behave otherwise other than the professional way. I wish more awards come, because this man is a professional. I hope and pray for him, and wish him good luck. 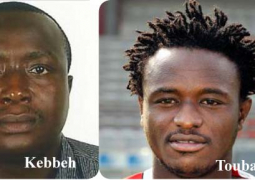