As part of activities marking the 15th Anniversary of the 22nd July Revolution, Her Excellency, the Vice-President and Minister of Women's Affairs, Ajaratou Isatou Njie-Saidy on Saturday 25th July 2009, commissioned a D27.5m project comprising new canteen blocks, the search and rescue tower, and the newly refurbished Barra Police Station.

The ferry terminal is said to be fitted with a seating capacity of about 300 people in the waiting area, a VIP Lounge, a canteen and offices for Immigration Officers and a conference room.

The ceremony which was held at GPA Complex in Barra, was graced by the Speaker of the National Assembly, Minister of Interior, Ousman Sonko, Chief Justice Emmanuel Agim, staff of the GPA, the Governor of NBR, Mr. Edward Seckan, the Minister of Works, Construction and Infrastructure, Lamin Bojang and Mr. Mustapha Colley, the Chairman of the Board of Directors of GPA.

Speaking at the Occasion, the Vice-President said that the inauguration of the terminal with its related works adds up government's infrastructure development for the region which, he said, is manifested by the Easau-Barra Amdaye Road, Eassau -Kerewan road, Kerewan Bridge, Kerewan - Farafeni -Laminkoto Road, AFPRC General Hospital in Farafenni, as well as the construction of schools and health centres and the provision of electricity.

She underscored the significance of national development taking place in the North Bank Region since the Jammeh administration came to power.

The Vice-President also stated that government will continue to accord priority for continuous development of the ferry services throughout the country by encouraging the Gambia Port Authority to construct passenger terminals.

She expressed government's resolve to explore possibilities of acquiring new generation of ferries that will separate passengers from freight and vehicles.

She implored the residents of the North Bank Region and the Gambia Port Authority to take proper care of the structure, stressing that proper maintenance must be a routine as a way of guarantying durability. 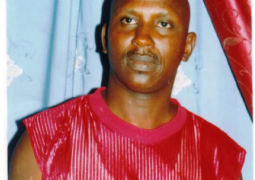