The day, which brought together diplomats, cabinet members, civil society, US embassy officials and a cross section of the public, marks the signing of the Declaration of Independence and the beginning of a great experiment, American democracy.

Speaking on the occasion, Barry L. Wells, United States Ambassador to The Gambia, who is on the verge of completing his tenure as Ambassador of the United States to The Gambia said independence as it turns out, does not free one from taking responsibility for one's actions or accepting the consequences of the choices and decisions we make.

According to him, America is not a perfect nation but will continue to confront its shortcomings and move the nation forward as it support the dreams of young democracies around the world - young democracies that strive to get it right for their people and stand proudly with the community of free and responsible nations.

The Gambia, he added, is one such young democracy that continues to work to get it right. "Gaining independence only 45 years ago, we applaud the Gambia's leading efforts to enfranchise women in government, in education, in leadership in all sectors of Gambian economy. Many nations could learn from the Gambia's example of tolerance and acceptance of religious diversity," he noted.

He stated that the United States and The Gambia may have shared values including the respect for human rights and democratic values. "We share a commitment to world peace and stability; President Jammeh and his government have worked to bring peace and stability throughout the region and the continent consulting with neighboring states struggling with instability and crime; providing peace keepers to troubled areas such as Darfur," he said, while applauding the President's zero tolerance for drugs following the seizure of a huge cocaine cache in The Gambia amid the growing menace of narcotic trafficking in the sub-region.

He added that in recognizing the important role of education in the fight against poverty, President Jammeh established the UTG despite those who said it could not be done. He said hundreds of young students are now studying there, preparing for their roles as leaders of the Gambia of tomorrow.

The US, he said, has extended the hand of friendship in many ways. "The Peace Corps arrived in The Gambia in 1967 just 2 years after independence and since that time, thousands of Americans have given two years of their lives to work and live with Gambian families, learning their languages, sharing their food bowls, teaching schools, helping in agriculture, public health and environmental projects," he noted.

Ambassador Wells revealed that over the last three years, the Ambassadors Girl’s Scholarship Program has supported over 3, 000 girls and recently some boys with tuition assistance, uniforms, counseling and other services, children who might not otherwise been able to attend school. Through the Ambassador's Special Help Program, he added, the embassy have provided milling machines and rice hulling machines, dug boreholes, built wells, latrines and renovated libraries in schools and built school kitchen, fenced gardens, donated bee hives and protective equipments and brought in solar power.

He also stated that The Gambia Armed Forces have consistently benefited from their training and development programs; in the last two years. "We have provided training for the Gambian military in leadership skills, basic infantry officer's course, engineering course, ship boarding training, international humanitarian law among others," he said, adding that through the US Department of Agriculture, the embassy provided a 5 million dollar cashew monetization program; and the fisheries department has benefited from a 2.5 million dollar project funded by the US AID to improve the lives of artisanal fisherman.

"The US Presidential Summit on Entrepreneurship earlier this year in Washington DC highlighted the important role that entrepreneurship can play in expanding opportunity at home and abroad, while deepening engagement among the US and Muslim communities around the world," he stated.

According to the US Diplomat, like any good friends, there are times when we disagree as governments, but in those disagreements, we respect the independence of our friends, give them the best of our advice and ask them for their support. "It is in this vein that we continue to work with the Government and the Gambian community to improve the human rights environment; that we support training and development programs that will improve the professionalism of journalists that can lead to true press freedom; that we promote and support programs for an independent judiciary," he said, adding that they do this not out of arrogance or the desire to impose our beliefs but as a friend who over the 234 years have learned that these are not options in a democracy; they are non-negotiable rights of a free people. "These are the foundations on which democracies are built," Ambassador Wells concluded.

For his part, Dr. Momodou Tangara, Minister of Foreign Affairs, International Relations and Gambians Abroad underscored the excellent relations of friendship and cooperation that exist between the two countries, which he added, has spanned over such a longtime that Gambians and Americans can rightly consider themselves as brothers and sisters.

"The Republic of The Gambia has for many decades benefited from the great generosity of the government and people of the United States not only in economic advancement of the people of the Gambia but equally so in capacity building and development in both the public and private sectors," he said. He noted with gratitude that a vital sector of the Gambian workforce has benefited and continues to benefit from our bilateral technical cooperation.

On the political and diplomatic sphere, Dr. Tangara noted that the two countries and governments have enjoyed harmonious and cordial relations based on shared and common values namely respect for human rights and democratic values, commitment to world peace and stability and our resolute fight against terrorism, drug trafficking among others.

According to Dr. Tangara, over a very long period, American nationals have been seconded to The Gambia to complement our manpower requirements in vital sectors such as the Judiciary, Education, Health and Communications. These gallant sons and daughters of the United States, he stated, have through their selfless service and dedication impacted positively on the goals and aspirations of the people of the Gambia in their drive to achieve a better quality of life.

While conveying government's appreciation and gratitude, Dr. Tangara assured the United States of Gambia's willingness and commitment to work with them in ensuring global peace, security and social justice.

He commended Ambassador Wells for his personal and selfless commitment in not only facilitating frank and healthy political engagement between the two governments, but also in ensuring a significant increase in US assistance to the socio-economic development agenda of the government of The Gambia. 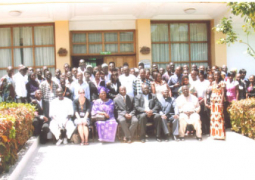