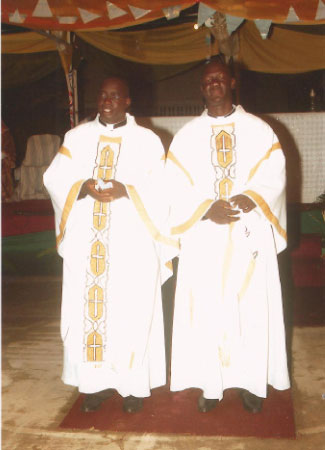 Saturday, 10th November 2012 was the day set aside for the ordination of two more Gambian priests in the Catholic Church.The two men are Rev. Fathers Mathew Mendy and Aime Joseph Colley.The venue was at the St. Peter’s Senior Secondary School, Lamin Village.

The ceremony and mass began at 4pm with a long procession of over fifty priests.Among them also were the Ordaining Bishop, Bishop Robert Ellison and the Arch-Bishop emeritus Joseph Ganda of Sierra Leone.All the priests where from the Gambia, Senegal, Sierra Leone, Ireland and Italy.They are supposedly friends and relations of the newly ordained priests.

The ordination mass was comprised of the liturgy of the word, the rite of ordination, consecration and communion.The high point of all these came at the rite of ordination. During this time the candidates were first called as they were seated in the congregation among their families.The calling of the candidates was significant because it meant that the men were called from among their families and people of God to the special ministry of the priesthood. This explains the Catholic theology of the priesthood as men are chosen from among their communities.These men share in the role of mediation between God and his people and also become offerers of the sacrifice of the Eucharist in the name of Jesus Christ (Heb. 5:1-3).

A spectacular incident happened during the ordination rite.When the Bishop began praying over the candidates, the rain came down from the sky.Everyone marveled at this to which some people remarked that it was a miracle and others called it showers of blessings.

The surprising aspect of the event was that there was no expectation of rain and secondly it only rained in Lamin and no where else.With great awe and surprise, the congregation accepted the rain as special blessings coming from God to everyone.

The celebration in general was a joyous one and after being ordained, the new priests were seated rightfully in the sanctuary to take up their roles at mass.

At the end of the Eucharistic celebration, Rev. Aime Joseph Colley gave a vote of thanks.He first rendered special thanks to God Almighty for the success of the day and for their call to serve as priests.Secondly, he gave thanks to the two Bishops and all the priests present as their presence was a sign of great encouragement.

Lastly, Rev. Father Joe gave thanks to their families and relations for supporting and allowing them to give themselves to serve the Christ.He also remarked that their lives are sacrificed to carry out the daily role of offering the sacrifice of the Eucharist for the faithful and so all people should pray for them to be worthy.

Rev. Father Peter Lopez on behalf of the Gambian Clergy offered welcome remarks to the two new priests.He also prayed for their fraternal acceptance in the Gambian church and clergy.

The two families of the priests also carried out the warm gesture of vesting the priests with local traditional beads, cloths, hats and staff.This gesture was a sign of respect and acceptance to the new priests.To their families the new priests assumed new roles in their lives to serve the Church and so they are special to them.

The Christian Panorama shares the joy of Rev. Fathers Mathew Mendy and Aime Joseph Colley and congratulates them. 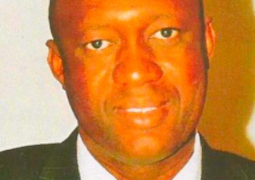