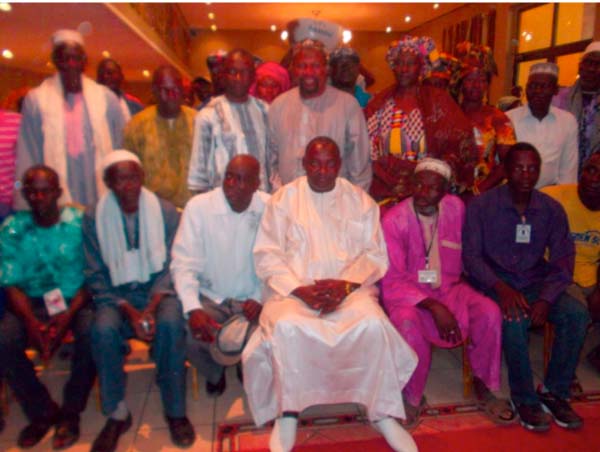 The people of Upper Niumi yesterday paid a courtesy call on President-elect Adama Barrow, at the Kairaba Beach Hotel.

Speaking on the visit, Aminata Jammeh of Niumi Lamin congratulated president-elect Barrow on his victory and wished him well in his endeavours.

She said the “people of Upper Niumi are behind” him, as he is their President and “nothing would change that” because the people had already spoken.

Whilst also speaking on the visit, Solo Drammeh, an elder of the Upper Niumi community, thanked the president-elect and assured him of their support.

Drammeh added that the people of Niumi “contributed immensely” to the process, especially during the campaign, of ensuring that Barrow became victorious, for which they sacrificed their time and even properties.

Another speaker on the visit, Kabiro Jatta, in his remarks, said the people of Upper Niumi had been in opposition since 1994, and had stood together with other people of the nation to change things for good.

He said they “are very much optimistic that things would be better for the people,” as Barrow takes over the reins of power in a couple of weeks’ time.

He added that they would continue to pray for peace and stability in the country, so that a transfer of power could take place peacefully, come January 19.

In his response, President-elect Barrow thanked the people of Upper Niumi for their support, and for sacrificing their time to pay a courtesy call on him.

He said that something great and remarkable had taken place in The Gambia, which is the unanimous will and support for a change of government that has ruled for 22 years.

“The fact that the people of the nation stood together with one voice to make a change through the ballot box, is in itself historic in The Gambia.

“The people have decided this time, and it should be respected,” President-elect Barrow continued, adding that such a resolute stance by the Gambian people had shown that power belongs to the people; and he, therefore, sees himself as a servant of the people; hence he should listen to them, work with them, learn from them, and serve them well.

Barrow assured the people that democracy would be restored in The Gambia, and the voices of the people, especially the voiceless, would be heard.

He said a change of government, from time to time, is a very good thing; because that helps a country to go from height to height with transformational development, and a sitting government to do well.

He urged the people to continue to pray since prayers make everything possible and easier to achieve.

He told the people that, come January 19, he would be the legal president of The Gambia “In Sha Allah”.