Bah, 51, is seeking the mandate of Gambians for the third time, having lost to Jammeh in the 1996 and 2001 elections.

Addressing hundreds of party supporters at rallies held on Sunday, Halifa Sallah of the Peoples Democratic Organisation for Independence and Socialism (PDOIS), which is part of the United Front, dilated on the importance of the presidential election, noting that it is only during this period that citizens will decide who will be entrusted with the affairs of the state.

In doing so, Sallah added, citizens should know who to vote for as their president because, as he put it, the people’s power is their vote, voice and freedom.

“People in this country are living in a state of fear; they do not trust each other and are afraid to speak freely for fear of being arrested or jailed,” he said, noting that “members of the National Assembly are responsible for safeguarding the interest of their electorates, but the APRC government has amended some areas in the Constitution to suit its interest.”

According to him, the voter’s card symbolizes citizen’s integrity, power, their voice and everything.

“When one casts his or her vote for a particular candidate, it means that person has given away all his or her powers, voice, among others to that candidate. Therefore, it is very important for the electorate to know whom they should vote into office,” Sallah told supporters.

Noting that it is time for Gambians to know who they are, know your own country and then know the right person to vote into office, Sallah said the United Front is out to campaign for the presidential seat because Gambians need change for a better Gambia.

“This country is facing a lot of difficulties, and it is only the United Front that can rescue Gambians if voted into office. It is not animals that can bring development into this country, but it is the people that bring about development. The person elected into office should be someone who is development-oriented, but the APRC government has failed Gambians for the past 17 years of its leadership,” he added.

He said that some of the country’s resources were being sold outside the country, and the funds from its sale are nowhere to be accounted for.

“The APRC government has failed to create employment opportunities for Gambians, especially the youths. In the area of transportation, the government should have invested properly and managed the funds to buy ferries and later buy river transportation system,” he said, adding that this would have created employment opportunities for Gambian youths.

He further stated that if given the mandate, a United Front government will within its first five years work on restoration and restructuring of the country and other developments as planned, and that after the first five years, they will step down and split into their various parties and campaign for the seat, but no party can rule for more than two terms.

Hamat Bah, who also spoke at the meetings in Brikama and Sotokoi, said Gambians are tired after having suffered a lot of difficulties.

“What Gambians want now is a change, and that is what the United Front has come to do and to create a new Gambia. We are all equal, and it is our voter’s card that is our power; no tribal discrimination or religious differences,” Bah said.

“The APRC government has failed Gambians in all the aspects because, as we speak, some Gambians are jailed and others have gone into exile. But be rest assured that a United Front government will free all political prisoners once voted into office,” Bah assured.

Henry Gomez of the Gambia Party for Democracy and Progress (GPDP) said “under a United Front government, Gambians will be treated equally, unlike under the APRC administration.”

According to him, the poverty level in the country is rising on a daily basis, as prices of basic commodities are now beyond the reach of the average Gambian. 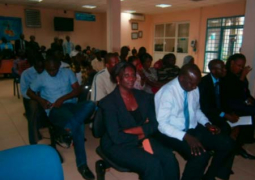