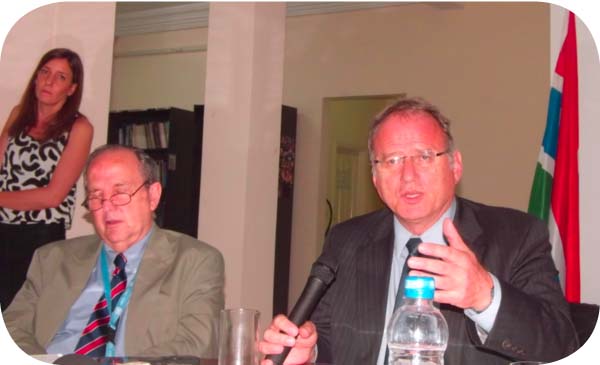 The UN experts, who were on their first-ever visit to The Gambia to conduct a fact-finding mission under the UN Human Rights Council Special Procedures, told journalists at a press briefing held at the UN House at Cape Town in Bakau that they were prevented from completing their investigations in The Gambia.

They said they carried out an official mission to the country to examine the current level of protection of the right to life in law and in practice, and assess the situation and identify challenges regarding torture and other cruel inhuman or degrading treatment or punishment in The Gambia, among other things.

The experts said they were not allowed  into prison cells with their mobile phones, tablets, recorders or cameras, which according to them “undermined their mission” because they couldn't work without those gadgets.

They said when they met with the Vice President and the cabinet ministers and some senior government officials to explain the conditions they faced, they were told by the Vice President that “rules are rules because even herself is not allowed in the prison cells with phones”.

The experts stated that in a remarkable and encouraging step, the Gambian Government invited the UN special rapporteurs earlier this year to conduct a joint visit from 3 to 7 November 2014.

Unfortunately, and despite a written agreement accepting the terms of reference of the two mandates, once the investigators arrived, the government denied them access to certain sections of the first prison the two mandate holders attempted to visit.

The government offered instead a guided tour to parts of the prison, informing them that under no circumstances would they be allowed to visit the security wing, “where inter alia the death row prisoners are held”, the experts added.

“The prospect of departing from the principle of unrestricted access in one country but not in others we have or will visit, would clearly display double standards and undermine the mandates entrusted to us by the UN Human Rights Council,” Juan Mendez, one of the Special Rapporteurs, said.

“Due to denial of access to the security wing of Mile 2 prisons to visit those sentenced to lengthy sentences, including the death penalty, an inference must be drawn that there is something important to hide. This incident forced us to suspend this integral part of the visit,” the other special rapporteur Christof Heyns added.

They said that since they had to suspend visits to all places of detention, they were not able to assess independently the conditions in any of the prisons or police stations, though they were able to meet with people who had been detained or served their sentences in these prisons.

The two experts said that throughout the visits they received many testimonies from people who did not want to be identified, out of fear, for either their own safety or their families, and they had therefore asked the Government to reaffirm its commitment not to engage in any reprisals.

The two experts said the seemingly arbitrary re-introduction of executions for a couple of days in August 2012 and then its subsequent suspension shocked the world and tainted the Gambian Justice system and its approach to the right to life.

According available evidence, the death sentences were “imposed in violation of international fair trial standards”, including the most serious crimes provisions.

“Prior to these events, the last official execution in the country took place in 1985 and the country actively participated in the region’s efforts to abolish in law and practice the death penalty, with the moratorium on the death penalty for 27 years and the abolition of capital for drug offences in April 2011,” Mr Heyns noted.

“However, the executions undermined these efforts and represented a major step backwards for the country, and for the protection of the right to life in world as a whole,” he added.

“During our visit, we also received reports of extrajudicial executions and enforced disappearances against those who are deemed to be opponents of the regime, members of security forces, journalists and human rights defenders,” the experts said.

“We would like to recall the duty of the Government to take measures to prevent and punish deprivation of life by criminal acts and to prevent arbitrary killing by their own security forces,” the experts said.

The also said they received many reports that “there are para-military hit-squads in the country” that go by such names as the ‘Jungulars’.

They said these are serious matters that will expose those behind it to criminal prosecutions, if proven to be correct. They called on the government to appoint a judicial commission of inquiry to investigate the allegations.

“During my investigations I found that torture is a consistent practice carried out by the National Intelligence Agency. “In cases where there is a real or perceived threat to national security there is a corresponding increase in acts of torture and ill-treatment during the detention and arrest,” Mr Mendez said.

The experts say the government has an obligation to investigate, prosecute and punish every incident of torture and ill-treatment and the obligation to prevent such occurrences.

“It will be important for judges and prosecutors to take it upon themselves, under a sense of legal obligation, to visit places of detention to locate detainees subject to a petition for habeas corpus relief or bail; to order medical examinations by qualified forensic doctors as soon as any suspicion of mistreatment arises and to initiate prosecutions against whomever may be responsible for mistreating an inmate,” they explained.

“While the standards for detention and arrest by the police appear to be consistent with international law, we are concerned that in practice, arrests pursuant to a warrant are the exception and not the rule.

“The reasonable suspicion standard is seldom if ever examined to determine whether reasonable grounds existed and the evidence obtained pursuant to an otherwise illegal arrest is challenged even less frequently. As a result, police arrest to investigate, rather than investigate to arrest,” the experts said.

When The Gambia appeared before the universal periodic review at the UN Human Rights Council last week it appeared that a fruitful dialogue on human rights could help the country re-engage with the international community.

“This was our hope when we committed ourselves to this visit in good faith,” the experts said.

“While our visit has experienced serious challenges regarding unrestricted access and an overriding atmosphere of apprehension and even fear from many who engaged with us, we welcome the assurances we have received from officials at the highest level that there will be no reprisals, and hope that the Government will find our observations helpful for continued engagement on human rights,” the experts said.

“We will continue to engage with the Government and all relevant stakeholders to receive more information and clarifications before we present our respective final reports on our visit to the UN Human Rights Council in March and June 2015,” the experts said.

“We wish to conclude by reiterating our appreciation to the Government for having invited us to visit the country. We hope that our visit leads to a fruitful cooperation between our mandates and The Gambia.”