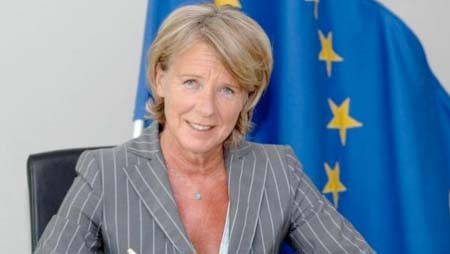 The United Nations Special Rapporteur on the Sale and Sexual Exploitation of Children, Maud de Boer-Buquicchio has warned children to desist from spreading sexual images of themselves on the internet thinking that it would remain between friends.

Maud wraps up her nine days assessment of the scope of sale and sexual exploitation in The Gambia – from October 19th – 21st.

“One of the emerging issues of many countries of the world is the issue of sexual exploitation and abuse of children through the internet where children are at risk and it clearly shows there is a need for further awareness raising,” she said at a press conference at UN House in Bakau.

According to her, this will need more work from the government, but also needs the involvement of the private sector and in particular the Internet service providers.

“The sector is developing very fast and children need to know what risks they are being exposed to – not just to be exposed to grooming, it’s also about images being spread on the internet when they inadvertently believe that they can share sexualized images of themselves thinking that it will remain between friends. That can leave a very traumatic impact on children who are subjected to that kind of exploitation.”

Discussing the impact of a culture of silence in Gambian society, the special rapporteur said family interference has caused a lot of crimes to go unreported and even withdrawn.

According to her, if the child is willing to make a declaration to the police, very often it yields results of pressure from the family and these cases are subsequently dropped.

“The complaints have been withdrawn, there were settlements amongst families of perpetrators and victims because of something that has to do with stigma and they don’t want to be identified and the matters have not been pursued in court. This is a very big issue and therefore there is a need for desensitisation of society to allow children to speak up to make parents understand that these are crimes that should be prosecuted.”

Regarding sexual exploitation in the tourism sector, she shared her findings she gathered from hotel managers, tourist operators and tourist taxi drivers. She urges for high vigilance from parents who allow their children to visit tourist development areas for business purposes. She noted that some tourists are with the thought that Gambian girls and boys are easy to be preyed.

“Sometimes the parents are complicit – they perhaps start asking their children to sell bananas on the beach or fruits and when it comes to further financial gains by selling their bodies, they are not necessarily stopped by their parents. It is important to sensitize the whole of the population.”

The UN Special Rapporteur said from her discussions with tourist operators, hotel managers, taxi drivers those people feel that they have a possibility to denounce sexual exploitation in the sector, but are hindered by the culture of silence.

She discloses that the abusers are now moving on to standardised places where they can conveniently do the sexual exploitation.

“It’s very important that the whole licensing system in relation to those kind of places is properly adjusted to track down those who have such things to do.”

She blames the government for its weakness in terms of prosecution of certain crimes that are prohibited by laws of the land such as child marriage – which she believes has been occurring and there has never been any prosecution.

She calls for better coordination between government agencies and the civil society for quick reactions to the sexual exploitation of children. However, she acknowledges the lack of resources, which affect the progress of the government including the failure of not sustaining the “hot alert” calling system that used to give victims the opportunity to swiftly report such crimes to the police.