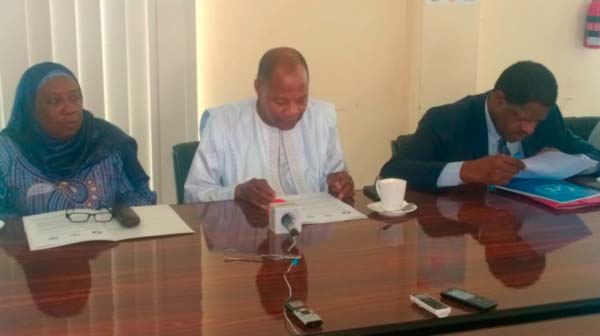 The Economic Community of West African States (ECOWAS), the African Union (AU) and the United Nations (UN) undertook a joint mission to Banjul that held consultation with key government officials and political stakeholders on the upcoming election in The Gambia.

The mission, led by the president of the ECOWAS Commission, the AU Commission for Political Affairs, and a Special Representative of the UN Secretary General for West Africa and the Sahel, yesterday shared with the media the outcome of their consultation and findings in The Gambia.

The mission also included the Office of the High Commission for Human Rights through its regional representative for West Africa.

According to the Special Representative of the UN Secretary General for West Africa and the Sahel, Dr Mohamed Ibn Chambas, the joint mission aimed at developing an understanding of the viewpoints and perspectives of Gambian stakeholders on political and other developments affecting The Gambia, ahead of the presidential election due to take place in December 2016.

It also assessed compliance with regional and sub-regional standards on elections, democracy, human rights and governance, including the ECOWAS protocol on democracy and good governance and the AU charter on democracy, elections and governance, and exploring options to further support dialogue among Gambian stakeholders with a view to promoting consensus on critical issues.

This is being done to contribute to achieving inclusive, credible, participatory and peaceful elections in The Gambia.

Speaking to the media, Dr Chambas said the joint mission consulted widely with cabinet members, and the delegation also interacted with the chairman of the IEC and the representatives of civil society organisations.

The joint mission also met with Gambia’s diplomatic partners including ambassadors from ECOWAS countries, the head of the European Union Delegation, the British and US ambassadors, and the Spanish Charge d’Affairs, he said.

“The Mission appealed for credible and inclusive elections in an atmosphere of peace and tolerance throughout the electoral process,” he stated.

Dr Chambas added that the mission noted progress in the preparations towards the elections, and welcomed all stakeholders’ commitment to the holding of peaceful elections.

The mission commended Gambian stakeholders for the reinstatement of the Inter-Party Committee, which may serve as an effective platform for the resolution of contentious issues ahead of, and during the electoral process, said Dr Chambas.

He said the mission also urged political parties to work together to create a consensus around electoral laws and enhance outreach to increase the participation of youth and women.

The mission, he explained, encouraged the establishment of an elections situation room, “which is best practice in many African countries”.

Dr Chambas said the mission also welcomed the announcement by the President during the State Opening of the National Assembly, and looks forward to the establishment of the proposed National Human Rights Commission.

With regard to ongoing judicial proceedings and, in particular, to the events on 14 and 16 April 2016,  Dr Ibn Chambas noted, the mission evoked international and regional standards according to which the state has the duty to protect the rights of its citizens, in particular freedom of expression, assembly and political participation.

“The mission also reiterated calls for a credible and independent investigation, and urged the Government of The Gambia to allow the due process of law,” he said, adding that the joint mission expressed the wish that The Gambia would emulate the ongoing trend of peaceful and inclusive elections across West Africa, as a precondition to confront challenges of development, in line with the aspirations of the Gambian people.

Dr Chambas also highlighted the issue of the border closure, saying the delegation appealed to the two countries to continue the dialogue underway and, in particular, to convene the bi-lateral meeting scheduled for mid-May with a view to arriving at a mutually agreed solution.

“United in the vision to contribute to a better future for the peoples of Africa, ECOWAS, the AU, and the UN re-affirm their continuing commitment to supporting the Government and the people of The Gambia in their quest to realise the Universal Sustainable Development Goals,” he said.