The tradition of the Catholic Church is unchanging as it is shown in the activities of even the newest Catholic Church in the country. Church of the Blessed Sacrament at Kanifing opened only last year has picked up Mary Crowning at the end of the month of May, to show their respect and love for the mother of the church. The month of May is the month of Mary particularly dedicated to the Mother of God, Mary plays a center role in the life of Catholics who pay special homage to her for her intercession in their lives. In the month of May the Catholic Church devotes the month to praying the Rosary to Mary to intercede for them. The Blessed Sacrament Church headed by Rev. Fr. Peter Stephen Lopez, the shepherd of that church with elders and parishioners of the Church crowned Mary in a grand procession and prayer. Read on and see how the occasion went and how they wish to continue and make it big.

The May crowning as said by Fr. Peter Stephen Lopez is an old tradition of the Catholic Church and of The Gambia. The occasion he said had existed till the 1970s when it was abandoned unconsciously to date. Fr. Lopez is poised to change the trend by getting his parishioners involved. The whole church at Kanifing saw a different trend over the weekend when neighbours and well wishers were gathered in the church area to crown Mary at the end of her month.

The programme was full of joy and reverence to Mother Mary. The programme started with a procession from a parishioner's compound which is about 400 metres to the church. They sang songs Marian hymns to the joy of many. They processed to and round the church as some women were in tears thinking of their Mother Mary and what she can do and has done to them in miraculous ways through dedicated prayer for help, especially the Rosary. Many women and men have talked about the favours received from their intercessory prayers to Mary.

Inside the church, the image of Our Lady, Mary was placed and the lay faithful the oldest woman in the church, who is about 83 years - old laid flower and crowned Mother Mary. During that instance the church sang the Magnificat. This was edifying and men, women and children rejoiced to the full.

After the whole praying and crowning, the day was crowned by During the Mass, Fr. Lopez spoke on the goodness of Mary who had accepted the challenge to giving birth to our Saviour Jesus Christ. He says, "Mary's simplicity and acceptance to become Jesus' mother is a honour. She prayed and did her work diligently to the admiration of the lot. She accepted and became a model for Christians to copy from." He further said that they spend 31 days saying the rosary in the month of May and even after. The May crowning is the climax for the dedication to Mary for 31 days in her month and we say "Thank you to Mother Mary at this May crowning. This is a maiden Crowning after years of absence of its kind."

After the prayer at Mass the lay faithful brought thousands of candles. Prayer intentions were written by individuals and were placed in a big bucket and incense added to the prayers. The smoke rose high with earth moving songs that made the occasion a solemn and more holy affair. According to Marie Ellen Jobe, a member of the Lector Group and an active parishioner, the Maiden Crowning is a new thing to her as she was not around when it was carried out in the 1970s. "I see why our elders are devoted to Mary, this must have contributed to their love for Mary. I look forward to hearing to such again and in a grand style by inviting other parishes and other Christians and Muslims if possible." Pierre Mendy says, "This is a life changing ceremony, please Father Lopez, do it again and again." Kattimu M. Peters says, " I was not feeling well but the devotion to Mary this day made me feel better. This is my first time seeing this, I have seen others but not this May month Crowning."

Fr. Peter Stephen Lopez said the devotion of the parishioners is commendable. The Church had it that it should be practiced and now it is encouraging us to pick it again.  We are also encouraged to have it in our churches. He said the next one would be celebrated in a bigger and grand style. It will be longer and more enjoyable.

Announcements: The visit of the Cardinal from is announced for Thursday, tomorrow. He arrives at the Airport with his entourage at 1:00 p.m. Churches are encouraged to go out in their numbers and to even buy T-shirts to welcome Cardinal Adrian Sarr of Dakar. The community is also asked to come out and welcome the Cardinal in their numbers. 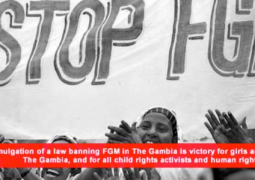