The national U-17 team's proposed international training camp in the is in advanced stage, according to the GFA President, Seedy M.B Kinteh.

The two times African U-17 champions will be going to the British Embassy in order to sort out their visas that will enable them travel to the U.K for their proposed training camp, slated for Friday 25th September 2009, the GFA boss told Pointsport yesterday.

A total of 25 players with the exclusion of those affected by the magnetic resonance imaging [M.R.I] test, according to Seedy, are selected to take part in the U.K. training camp where three other players, namely Foday Sidibeh who plays his club football in one of an academy teams in London, Swedish born Gambian in the name of Alieu Darboe who has recently signed a professional contract with an academy side in Sweden and Charles Davies from the German side Hertha BSC will also make up the team.

The Ministry of Finance promised to provide the tickets of the U-17 players that will undergo the training Camp Mr Kinteh revealed.

As part of the team's fund raising drive and road to , Gamtel/Gamcel presented an amount of D2 million six hundred and thirty-two thousand dalasi.

The team's training camp received a moral boost when the government of the presented them D3.5 million dalasi recently. 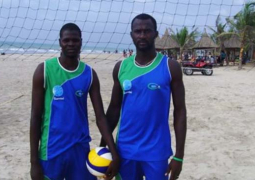