The three are alleged to have damaged the planted crop of one Momodou Camara, valued at D250, 000.

Testifying as the Defence Witness, Mr. Jaiteh told the court that the allegations leveled against the accused persons are baseless.

According to him, all lands within the Greater Banjul Area are classified as state land, noting that the allocation of state land is rested under the Ministry of Local Government and Lands.

He further told the court that, the area was allocated to the accused persons by the Ministry of Local Government and Lands and a copy of the allocation certificate was sent to him.

He noted that during the inspection of the area, he found the complainant, Momodou Camara, in the said land claiming to be using it for the purpose of farming. He said when he asked the complainant who owns the land, but he responded that it was given to him by one Kunda. Mr. Jaiteh said he told the complainant that all lands within the Greater Banjul Area are classified as state lands and administered by the state.

He said he further asked the complainant whether he had a certificate of occupancy, to which he replied in the negative.

Alkali Jaiteh further adduced that, he told the complainant that if he wanted to use the state land for gardening or other purposes, he should apply to the Ministry of Local Government and Lands. He informed the court that "a letter was sent to him from the Ministry of Local Government and Lands informing him that, the land in question was allocated to the accused persons' institution with immediate effect and that they should build a building within 90 days, and that they should also fence the perimeter, failing which the state will enforce in accordance with the State Land Act".

He said during the inspection of the area, he invited all the occupants and told the complainant to vacate the area as soon as possible, but the complainant failed to heed to the advice.

He said one day, he was invited by the Station Officer of Bakau Police Station to shed more light on the issue as the Alkalo of Bakau. He revealed that he told the Station Officer that the area had been allocated to the accused persons by the state and produced documents to that effect in the presence of both parties. He said he told the complainant that, the accused persons had an enrolment of over 350 students who were out of school because of their eviction from the premises. And as a result, the government had taken it as urgency to allocate the accused persons a piece of land for the construction of a school. 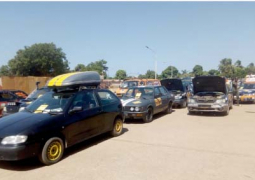