The Kanifing Magistrates’ Court yesterday remanded two persons after they were charged with offences such as conspiracy to commit felony, burglary and stealing.

Sulayman Jammeh and Mustapha Touray both pleaded guilty to the charges, and were remanded in custody.

According to the facts presented to the court presided over by Magistrate Jobarteh, the incident happened on 3 July 2012 when the two were together the whole day until night discussing how to go and steal.

Police prosecuting officer Sergeant 1718 Kinteh told the court that the accused in their cautionary statement said they went around for a target, until they reached the complainant’s compound.

They got access to the complainant’s compound at around 3:00 am and 4:00 am and stole items including a laptop, technosat receiver, box containing jewelry, mobile phone, jack, and two Qcell Data cards.

The complainant, Amie Hydara, later realised that thieves had entered her compound, and she reported the matter to the police.

The complainant was later called at the Serrekunda police CID office informing her about thieves they had nabbed, the prosecutor further narrated.

“The complainant went to identify the items, and realised that they were her properties,” Kinteh told the court.

The accused persons were later cautioned and charged with the offence, he said.

However, he told the court that the items that were recovered and which he intended to tender were not brought to court, as the exhibit keeper was indisposed.

Responding to the charges after pleading guilty, the first accused person told the court that he was influenced by “satan”.

He adduced that the incident happened when they were returning from attending a program at Jokor, stating that he was a first offender and never had a case with the police.

The second accused person also told the court that at the time of the crime, he was not with his senses; that he was drunk when coming from the programme, and “what happened was a mistake.” 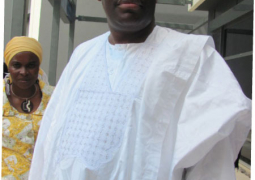