The criminal trial involving Musa Jassey, Fatou Jassey and Abu Njie, who are charged with conspiracy and stealing recently continued at the Brikama Magistrates' Court before Magistrate Fred Forster.

Testifying before the court, the witness Sulayman Jallow informed the court that, he is a businessman at and that he recognised the 3rd accused person, Aba Njie.

According to him, in the month of June 2009, he met the 3rd accused person, Aba Njie, at the Wellingara Police Station CID office when he was called by Sgt Jallow, to serve as an Independent witness in the case.

The Independent witness told the court that in his presence, the 3rd accused, Aba Njie made cautionary and voluntary statements without any force.

After the testimony of the Independent witness, the 3rd accused Aba Njie entered into his defence with regards to his cautionary and voluntary statements.

According to him, when he was signing the cautionary and the voluntary statements, the Independent witness was not present. He stated that he was there with Sgt Jallow, two CID officers and his uncle.

He adduced that, the statement that was written by him was cancelled by Sgt Jallow, who told him that what he was writing was not true.

He revealed that Sgt Jallow obtained the statements from him which he signed. 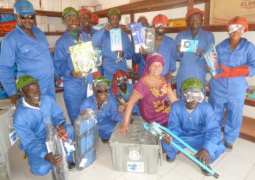