The National Tourist Guides Association NTGA of The Gambia recently presented a cash amount of D5, 000 to Jammeh Foundation for Peace (JFP) and another D5, 000 to President's Empowerment for Girls Education Program (PEGEP), at a ceremony held at its head office.

The Executive Director of the Jammeh Foundation for Peace, Mrs. Nancy Njie, who received the donated cash, commended the National Tourist Guides Association for their timely gesture, noting that JFP cannot do it all, and thus Gambians need to contribute more towards its progress. She said the JFP have good friends outside The Gambia, who also donate to the foundation.

According to her, the amount of money presented to both JFP and PEGEP is not small, noting that it will fill a gap at both institutions.

"Raising the flags of the JFP and PEGEP should be everybody’s concern because the JFP was established by President Jammeh with the purpose of helping Gambians in the areas of education, health, among others," she stated.

For Nancy Njie, it was very touching to see young Gambian entrepreneurs present such an amount of money to JFP and PEGEP, describing them as true and patriotic friends of JFP and PEGEP.

She said presentation of this nature would strengthen friendship between NTGA and JFP-PEGEP, and then urged other Gambian youths to emulate the NTGA.

Presenting the cheque, Assistant Secretary-General of NTGA Yusupha Drammeh said the donation was from the members of the association. This, he added, is another way of eradicating poverty in the country.

According to Drammeh, they have a membership of 63 from different hotels in The Gambia, most of whom, he said are based around Kairaba and Senegambia Beach Hotels. He said this is the second time his association is donating to JFP and PEGEP, promising that they would continue to do their utmost best towards the development of The Gambia. 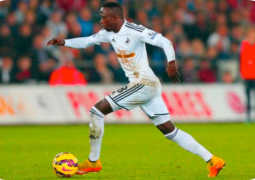