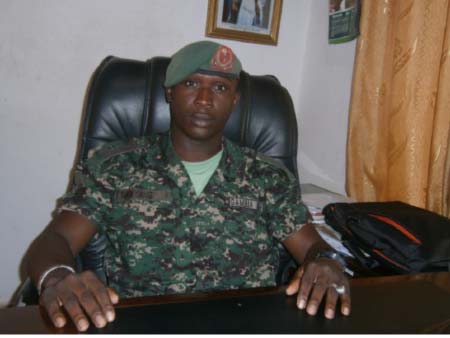 PRO Sanyang was speaking on Tuesday to The Point at his office located at GAF headquarters on Marina Parade in Banjul.

He replaces Captain Lamin Sanyang, who has been given a new assignment.

Said PRO Sanyang: “I thank the Almighty Allah and the Chief of Defence Staff for the trust and confidence he has in me.”

The GAF spokesperson hopes to further maintain the existing cordial relationship between GAF and civilians.

“I believe my predecessors have done justice to the office and I am grateful to carry out the same mission,” he said, while pointing out that he would maintain corporation between GAF and the media.

Second Lieutenant Sanyang further solicited the support of all members of the Gambia Armed Forces and the civilian population.

Second Lieutenant Sanyang was born at Kantora District in Upper River Region of The Gambia.

PRO Sanyang was recruited in the Gambia Armed Forces in May 2009 and after completion of his basic military training he was decorated as an Officer Cadet in 2010.

In the same year, he was sent for an infantry basic officer leadership course at the Maneurer Centre of Excellence in Fort Benning, Georgia in the US and completed with a diploma and a certificate in combat life safer.

The new PRO was serving as a platoon commander, post commander at an Infantry Battalion in Kartong and as a member of Operation Tiger Watch, before his current appointment.