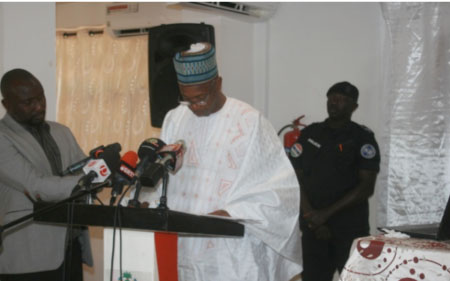 As part of the preparations to host the National Roots Homecoming Festival for 2020, the minister of Tourism and Culture, Hamat N.K. Bah, on Wednesday launched the National Organising Committee (NOC) in preparations for the event.

The official launching which was attended by senior government officials as well as other stakeholders was held at The Gambia Tourism and Hospitality Institute (GTHI).

Mr. Bah said since they took office, the ministry has been working hard to resuscitate the festival and to give it a national outlook and character, adding during the second republic, the roots festival was more of a Kanilai show, and not a national character. “It was not reflecting in the Gambian culture,” he said, noting that the people themselves should own it particularly the private sector.

“In the last summer, my ministry presented a paper that the Roots Festival should be revived although with a new face, and my team has carefully gone through the various suggestions made at the conference regarding roots as a festival.”

Minister Bah tasked the NOC to help the ministry in organising the National Roots Homecoming Festival in December 2020, adding that that edition of the festival would have a new look and reorientation and spread to all the corners of the country including Juffureh. He outlined that its objective would be to reunite the people of African descent, while promoting The Gambia and her cultural and historical values. It is also to further encourage tourism investment in the country and also forge closer ties between The Gambia and Pan African people for mutual cooperation and development.

Dawda Nyang, director general, Gambia Tourism and Hospitality Institute (GTHI), said festivals are key in offering products to any destination, adding the Gambia is no exception.

“Lot of efforts have been made to promote The Gambia, but hosting festival like this will give us another advantage in making the destination to where we want it to be,” he said.

Cordu Jabang-Senghor, permanent secretary, Ministry of Tourism and Culture, said the purpose of instituting the National Organising Committee is to work on the National Roots Homecoming Festival scheduled to take place in December 2020.

PS Jabang-Senghor said in welcoming the NOC members, particularly the new members into the tourism family, “I would like to extend the Hon minister’s appreciation for accepting to serve in the committee.”

She added that the task and responsibility of the committee are quite substantial, extensive with clearly laid out goals and objectives.

“The festival is to showcase the extra-ordinary and rich cultural heritage of the Gambian people, thereby promoting our country as a cultural tourist destination and investment in our community.”

Nyang Njie, chairman National Organising Committee thanked Minister Bah and all those who are working with him in the committee.

Hassoum Ceesay, director general, NCAC, said in 2017 when the Minister Bah came to office, he tasked the NCAC to work on reviving ‘Roots’, but in a branded fashion, adding that ‘Roots’ as a festival should come back, but not as it was before.

“The national chairman will work with us to bring different people with diverse talents.”

Mr. Ceesay said brining the media houses into the committee is something very important particularly in the area of publicity.