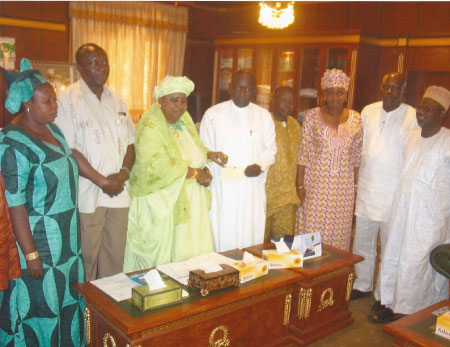 The Association of Timber Dealers and Forest Users led by its chairman Lamin Barrow on 4 May 2012 presented a cheque for D40,000 to the Vice President Her Excellency Madam Isatou Njie-Saidy for onward transmission to farmers in the country to mitigate the loss and hardship caused by last year’s crop failure.

The presentation of the cheque, done as part of effort at contributing towards the development of agriculture in the country, was witnessed by the Executive Director of the National Disaster Management Agency (NDMA), Essa Khan, who chaired the occasion, the Minister of agriculture, the permanent secretary of the Ministry of Forestry and the Environment and other dignitaries.

In his presentation, the chairman of the association, Lamin Barrow, thanked Vice President Dr Aja Isatou Njie-Saidy for giving them the opportunity to present the cheque at her office at state house.

Mr Barrow told the gathering that his association presented the cheque as a quota of contribution to  national efforts at alleviating the impending problems and hardship of last year’s crop failure that has been declared by the Government of The Gambia.

He stressed “the importance the government attaches to the Ministry of Agriculture” under the dynamic leadership of President Jammeh.

He said that based on the importance attached to the Gambian farmers, the association deemed it necessary to come up with a token of D40,000 to donate to farmers through the Vice President of The Gambia to add  to the government’s contribution towards the welfare of farmers in the country.

Mr Barrow informed the vice president that his association stands ready to give its support to the government’s effort and endeavours in every development aspect in the country.

His association’s priority is to protect the environment and vigilantly maintain forestry management, as well as assisting the government in all areas of national development, he said.

When the crop failure was announced and assistance sought by government, his association deemed it “very necessary to contribute their part towards alleviating the plight of especially the farmers, as well as with the consideration that agriculture is the backbone of the country, hence the reason for the cash donation.

Their stance as an association is always to be at the side of the government in the sense that their first priority as a forest users is to give support to the management of the Gambia forest, protect the country’s forest, as well as look into other issues such as crop failure, which warrants their intervention and helping hand.

Speaking on behalf of the Vice President and the Government of The Gambia, the Minister of the Forestry and the Environment, Fatou Gaye, expressed gratitude and appreciation to the timber re-exporters and forest users association in The Gambia, who thought deeply of the repercussions of the crop failure, which will affect all and sundry, especially the farmers and the grassroots people.

The forty thousand dalasi is no small measure and will go a long way to helping in addressing the farmers’ concerns and constraints, Hon. Gaye noted, while thanking the association for its noble contribution to the cause of mitigating the farmers’ plight and the national cry.

She urged members of the association to continue the good work of complementing government’s effort.