The UNAIDS country director, Sirra Horeja Ndow, has said that the world is committed to end AIDS epidemic by 2030 as part of the targets in the Sustainable Development Goals (SDGs).

“This ambitious yet attainable objective represents an unparalleled opportunity to change the course of history forever,” Ms Ndow said during the commemoration of World AIDS Day, 1 December, at the Arch22 in Banjul.

“Today, we live in fragile communities where inequities can persist when essential services don’t reach the people in need. To change this dynamic, we must quicken the pace of action,” she added.

World AIDS Day is commemorated annually to show support for people living with HIV, remember and pray for those who have died of AIDS, and celebrate the achievements, reflect on the challenges and renew collective commitment to end AIDS.

Ms Ndow said this year, there is reason to celebrate as the trajectory of the HIV epidemic has been broken by reducing the price of ARCs (HIV medicine).

The reduction in the price of ARCs led to the increment of HIV positives on treatment to 15 million compared to 7.5milion in 2010 and 2.2 million in 2005, according to statistics.

“This extraordinary progress give us hope that it is possible to have a new generation free of HIV and to ending AIDS by 2030,” the UNAIDS country director said.

She noted that these results are possible thanks to the government’s leadership, and the good and close collaboration with partners such as the Global Fund, the UN system, NGOs and CSOs.

“Despite these achievements, we must not be complacent as we still have unfinished business to address since millions of people are left behind and we risk seeing a rebound if we maintain the status quo and doing business as usual,” Ms Ndow said.

She further added that there is a need for a collective effort to address the major challenges that continue to hinder the HIV intervention such as stigma and discrimination.

“Stigma is hindering people living with HIV and AIDS, especially women, from disclosing their status and impeding their access to services,” she explained.

She pointed out that another key challenge that “must be addressed” is the urgent need to intensify resource mobilisation for the national response particularly increasing domestic resources from the government and the private sector. 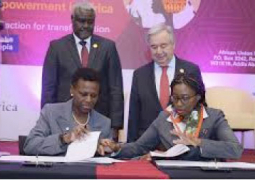