But, the verses which clearly mention the issue of compassion are verses 62-63 of Surah Anfal:

...It is He who strengthened you with His help and with the means of the faithful (8:62)

The Quran then immediately speaks about the believers:

It was not humanly possible for compassion to be places between the hearts of the Aws and Khazraj, who had fought for 120 years. The same could be said for the Quraysh and other Arab tribes who had fought for years. There was no possibility that compassion would be placed between their hearts through the use of monetary means or worldly blessings.

It is understood here that this compassion is a divine blessing which is only achieved through strong belief.

Shaykh Tusi defines the Arabic term akh (‘brother’) in Tibyan. He states that the term akh is used when two or more people have the same destination. He says: yaquluna fulaun yatawakhkha [same root as akh] sha’nafulanin (“It is said that a certain person travels along the path of another and that their destination is one and the same”). Or, it is states: khuz ‘alahadha al-wakha [same root as akh] (“performs an action and takes it seriously with the intention”).

So, the principle literal meaning of the word relates to people going in the same direction. A unified Ummah is a group of people who have one leader. Brothers are people who have one destination. Hence, there is a type of literal correlation between Ummah and brotherhood.

Therefore, the hearts of believer-who are brothers-are brought together, and their purpose and destination is one. Their concern is with Islam and its destiny. They all think about the Islamic world despite the fact that they are spread throughout the globe.

Unfortunately, there is no enough time to mention all the delicate points of the verse in question and to adequately depict the main purpose of the verse. The Quran states: “It is He who… united their hearts.” (8:62-63) this is similar to when it states:

In other words, this action is an action that Allah performs. It is Allah who sends messengers. It is Allah who unifies the hearts. The term ‘He’ in these verse (which all refer to Allah) carries a lot of meaning. Unifying the hearts of Muslims is a divine action, not a human one.

Allah is the one who created unity between their hearts. The verse ends with: “Indeed He is all-Mighty, all-Wise.” In other words, He created this unity between their hearts from His might and wisdom. Allah wants to bring the unified Ummah into existence. This unified Ummah must be brothers to one another. The condition of brotherhood is compassion. Allah created this unification of hearts so that believers would become brothers. It is only when they become brothers that the unified Ummah can be established and, like God in his station of might and wisdom, the truth can also be propagated [with might and wisdom]. There is much more to say in this regard as the Quran is replete with many fine points.

BROTHERHOOD IN THE QURAN

The Quran mentions the issue of brotherhood in many other verses. It states with regards to orphans:

….and if you intermingle with them, they are of course your brothers… (2:220)

Yet if they repent maintain the prayers and give the zakar, then they are your brethren in faith… (9:11)

THE DIFFERENCE BETWEEN COMPASSION AND BROTHERHOOD BETWEEN BELIEVERS AND DISBELIEVERS

On that day, friends will be one another’s enemies, expect for the God wary. (43:67)

People in such nations will state that they had nothing to do with the other and will say to them: “You misguided me. If you did not call me to this path I would not be in hell right now.”

Then they turned to one another, blaming each other. (68:30)

…Then on the Day of Resurrection you will disown one another and cures one another…. (29:25). 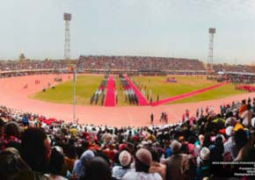 Independence Stadium to be close for renovation prior to Gambia, Gabon AFCON clash