The Truth About Soaring Prices

As conveyed in our lead story, many businessmen we spoke to  have called for reduction of tariffs on imported goods. They are of the view that high tariffs and taxes are responsible for the recent hike in prices of essential commodities in the country.

It is a widespread conception that business in general has gotten so slow in the country that some major shop owners have started relocating to other countries where duties are cheaper.

Another worrying phenomenon is that people from the sub-region are no longer coming into the country to buy goods for reselling back in their respective countries because our goods are said to be expensive.

Some financial authorities have confessed and acknowledged the difficulties that the business community is facing with regard to the re- export trade.

Of recent, commodity prices assumed an upward spiral so that average family's monthly spending on essentials has doubled. It is something of an irony that today, although the official inflation rate is low, the monthly spending of most Gambians have risen rapidly.

Recently The Point launched a cost of living survey as families struggle to keep afloat in the midst of uncertain economic period.

Such daily necessities as food, water, electricity, travel are hiking and many families are already struggling under the unfortunate pressure of this rising living costs and the price of grocery products have continued to rise.

The situation suggests that a household spending D2000 a month on food in 2007 will now have to find at least an extra D1000.

The increase in electricity and water bills threaten to shoot household budgets over the roof.

The income of the pensioner population is next to nothing. They are much more affected by what is happening now.

However, huge increases are being pushed through in the price of rice and oil because they are used widely.

The Department of State for Finance should review tariffs and taxes so that we regain the edge and competitiveness that The Gambia has been known for. They should act now before it is too late.


"Wealth is like sea-water: the more we drink, the thirstier we become; and the same is true of fame." 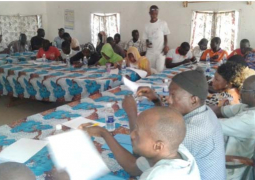