Hon. Ousman Sonko, the Minister of Interior has made it categorically clear that sexual abuse and exploitation of children is socially and religiously wrong, as it is immoral and a crime against children and the state.

Hon. Sonko who was recently speaking at the opening of a two-day forum on child rights and protection for religious leaders held in the Gambia Supreme Islamic Council's conference hall, said a child is religiously and traditionally considered as a sacred being, full of dynamism and energy.

Organised by the Child Protection Alliance, the forum brought together religious leaders from across the country.

He noted that "children guarantee the perpetuation of live and ensure the socio-economic future of the family".

"We have realised with great concern an upsurge in reported numbers of child abuse, exploitation and other forms of violence against children, which happens in our homes, communities and even institutions," he stated.

Hon. Sonko underlined that the government of the attaches high premium to the protection of children and their rights, a demonstration of which was the ratification of the convention on the rights of children (CRC), and its two optional protocols and African chapter on the rights of the child.

The Gambia Police Force, he went on, has created a Child Welfare Unit in order to investigate, arrest and prosecute offenders of children. He noted that the crime unit has been equally strengthened to tackle upfront cases involving children at national level.

He underscored the importance of the forum, stating that the sensitisation programme was a necessity as religious leaders play imperative roles in the lives of every individual. Noting that they are the epicentres of live in this world, he said, they have the mammoth task of promoting sanity in homes, communities and the country at large.

He then urged religious leaders to preach about the importance of child protection and rights in the mosques, churches and in other religious gatherings. 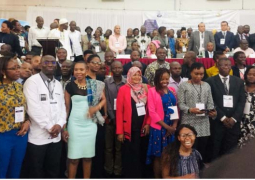