The Press an important component of society - Chief Justice

The Chief Justice of The Gambia Hon. Emmanuel Akimoye Agim has described the press as a very important component of the society.

Chief Justice Agim was speaking Friday, when he received court reporters from The Point, Daily Observer, Foroyaa, Daily News newspapers and the Gambia Radio Television Services (GRTS) who paid a courtesy call on him. In welcoming them in his office, the Chief Justice underscored the role played by journalists, especially in the legal system.

The courtesy call on the office of the Chief Justice by the journalists was, among others, aimed at introducing themselves to the Chief Justice, and to forge a partnership with the Judiciary towards the development of the county’s legal system.

It was also an opportunity to solicit support from the Chief Justice to help build the capacity of court reporters in order to enable them report more accurately, when it comes to law reporting, and to inform him about the formation of the Network of Judicial Correspondents, and to seek his blessing and advice.

Marenah appealed to the Chief Justice to help court reporters in building their capacities. "If we are well capacitated and trained, it will surely add value to our work. As press officers, we are also guided by a professional code of conduct and ethnics, which are our guiding principles," he stated.

According to Marenah, as journalists, they are fully aware of the challenges ahead of them. He was, however, quick to add that they are fulfilling their constitutional and primary role to inform, educate and entertain the public. “We try do this objectively and constructively,” he added.

Ebrima Jatta, a senior court reporter with GRTS, also made similar remarks, underscoring the timeliness of the move by the court reporters.

According to Jatta, a major challenge confronting them is lack of capacity building, especially in the area of court reporting. He solicited support for training to be provided to court reporters as this will enable them perform their duties better.

In response to the comments, the Chief Justice described the visit as timely and a step in the right direction, adding that it has never happened in the history of the judicial system of the country for reporters to come up with such an innovative idea.

He underscored the important role played by journalists, especially in the legal system, noting that it was very important that the journalists realize that there was a need for such.

According to Chief Justice Agim, there is a gap in terms of capacity building for court reporters, considering that the press is a very important component of any society. He said there is a need for people to be informed, and that information has to be disseminated by journalists in the society.

"The press has to be objective, transparent, and to be balanced. Your role in the judicial system is very fundamental as a large portion of the population relies on the information given by the media," he added.

Agim said, in the last two years, the Judiciary has witnessed a very fundamental improvement in the country's judicial system, particularly in trying to give access to justice to all, especially the poor.

He advised journalists to do their own independent investigation, and to get the facts before publishing anything, and then leave the public to judge for themselves. He noted that journalists should not be xenophobic, and that the courts are not only meant for judges or lawyers, but for litigants as well.

In his view, no one should be happy to see your fellow human being imprisoned, pointing that what matters is the rule of law.

"The press also has the responsibility to enlighten the society. Many African countries do have problems because of the low level of law enforcement. Journalists must have a look at the nature of situations," he said, adding that the job of the court reporters is helping their job in the judiciary in many ways.

On the issue of capacity building and training, the CJ said he would do his level best to solicit funds to train court reporters, adding that the meeting marked the beginning of another relationship with such reporters.

In showing his appreciation to the court reporters, Chief Justice Agim donated a copy of his recently-launched book entitled, "The Gambia Legal System" to each of the journalists.

The other members of the delegation were Sidiq Asemota, court reporter with the Daily Observer, Abubacarr Saidykhan, of Foroyaa newspaper, and Baba Sillah of the Daily News. 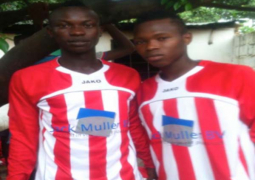 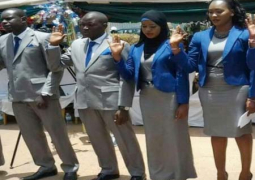