A senior lawyer and member of the Gambia Bar Association, Lamin K. Mboge, was yesterday granted bail by the lower court in , which denied him bail when he was arraigned earlier.

Mboge was granted court bail of D200,000 with two Gambian sureties with landed properties, and was also ordered to surrender his national identification card to the court.

Senior counsel A.B. Gaye, who led a team of counsel including B.S. Touray, Moses Richards, L.S. Camara, E. Jah, H. Gaye and Ousainou Darboe, told the court: "Your worship, there is a motion of notice filed before this court and has been served to the state counsel. The motion was for the court to admit bail to the accused person."

A.B. Gaye contended that the state was not opposing the application for bail to be granted to the accused person.

In response, the senior state law officer from the Attorney-General's Chambers, M.B. Abubacarr, adduced that they were not opposing bail to be granted to the accused person, but it must be done in a manner and on terms that will guarantee the appearance of the accused in court.

The presiding Magistrate Taiwo Abelga subsequently granted bail to the accused person, based on the above sum and conditions.

Defence counsel Gaye, shortly after the accused person was granted bail, told the presiding magistrate to make an order for the accused to be present in court in order to fulfill or satisfy his bail conditions.

The prosecutors claimed that L.K. Mboge, with intent to deceive, executed an affidavit in the name of Alagie Momodou Barrow without his lawful authority. He was also accused of making false declaration before Ebrima Sambou, Commissioner for Oaths, and also fraudulently uttered a false document to wit and an affidavit among other accusations, which Mboge has vehemently denied. 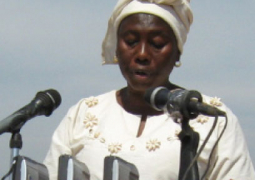