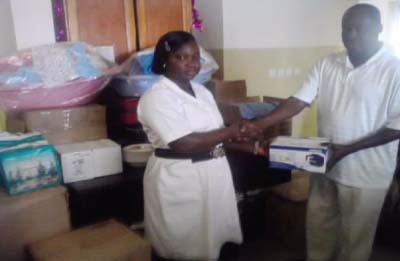 The family of the late Alhagie Kebba Conteh yesterday donated materials worth over five thousand Euros to the Maternal Unit of the in Kanifing.

The donated items included battery bank system, two cartons of Diapers, Nebulizer system for asthmatic patients, kettles, bowls, date oil, ultrasound system, as well as goods for the would-be newly baby boy and girl of 2012 who will each receive D5,000 courtesy of the family.

Speaking at the presentation, Momodou Conteh, son of the late Kebbeh Conteh, said their family has adopted the maternity unit for two years now.

“This battery bank system is worth over five thousand Euros with 3.5 KVA systems,” he said, adding that he decided to donate the particular items to assuage the electricity problem faced by the staff.

“We will do everything we can to give all what they need,” Mr Conteh said, adding that what they want is that all babies born in the hospital are provided with diapers.

However, he further reassured the hospital of more support come 2012. “Our goal is to provide electricity 24 hours,” he reaffirmed, saying the maternity wing is their primary interest.

“We are enjoying what we are doing and will continue to keep our father’s legacy,” he added.

Speaking earlier, Malang Ndong, CEO of Serrekunda Hospital, said the donation was the second of such gestures they have received from the Conteh family.

He also said that ever since the family adopted the unit, the staff have been doing everything possible to give maximum attention and care to patients of the ward.

“Since they started to support the ward we have not witnessed any maternal death in the hospital,” CEO Ndong said, adding: “We will ensure that the maternal unit becomes a centre of excellence in this country.”

For his part, Alhagie Sankareh, Regional Director of Health Service, West Coast Region, acknowledged that after their approval of the Conteh family’s adoption of the maternal unit years back, the family’s support has been impressive.

“This donation will go a long way in alleviating the constraints of the unit as well help the first babies expected to be delivered,” he said.

Mr Sankareh also revealed that the donation of the batteries is a clear manifestation of the family’s love and care for patients of the unit and hospital, urging them not to relent in their effort.

Health delivery is one of the expensive support one can render to a hospital since government cannot do it alone, he said, urging others to emulate such a humanitarian gesture.

Alagie Jarju from Green Industries Ltd was also present at the presentation ceremony. He said they also support the hospital through the Conteh family by selling diapers to them at reasonable price.

According Mr Jarju, their goal is to provide The Gambia with quality materials at reasonable prices. “Through the Conteh family we will support the hospital in our own way,” he said, while calling on other families to emulate the weighty gesture.