Gambian youths have for long hungered for opportunities to tap their vast potentials in pursuance of their lofty goals. Opportunities for self-fulfilment have unfortunately been limited until the advent of the July 22nd Revolution in 1994 that has since opened thousands of windows of crisp opportunities for any Gambian with a desire to excel!

These opportunities have come in various forms and in different sectors of our economy and society but to mention a few: education, the quintessential resource for sustainable development, has seen massive investment since 19994, and for me even if this were the only avenue opened for young Gambians, it would have sufficed to solve all our problems. In addition to that, we have had the proliferation of programmes that train our youth in the acquisition of specialised skills like the National Youth Service Scheme (NYSS) and furthermore resources have been made available to youths through the National Enterprise Development Initiative (NEDI) for young people to access funds for investment.

Unfortunately, we the youths have been found wanting in effectively utilising these great windows of opportunity to make our lives better. Instead we have sort ways and means of getting rich quick without paying the price for the goals we desire to achieve. This has led to such catastrophic ventures like risking the treacherous waters of high seas in pursuit of illusive utopian dreams in the West.

In my own case, in 1994, I had just finished my A levels and with no job and no university to go to. I was stuck, playing football and drinking attaya, day in day out. But come November 1995 and yet another massive door of opportunity was ushered in by the July 22nd Revolution: University education was initiated in The Gambia, and in the words of President Jammeh, “for the first time since God created this country!”

In my memoire, Jangi Jollof, I borrowed the words of the poet Robert Frost to describe my situation then, “two roads diverged in a yellow wood.... I took the one less travelled by, and it has made all the difference.” Now here’s what that great opportunity/experience has done for me; and while reading the synopsis of the experience I have lived by utilising this opportunity, never forget that I took the initiative to join the university and also took the pains of paying the price of attaining higher education:

I currently work as the Budget Director at the Ministry of Finance and Economic Affairs. I previously worked as a Principal Research Economist at the Central Bank of The Gambia from 1999 to 2009. I have a bachelor’s degree in Mathematics and a Masters in Economics. I have travelled extensively around the world, attending professional training programmes and conferences at the Central Banks of England and Switzerland, The IMF’s training Institute, and the prestigious John F. Kennedy School of Government at the Harvard University. And this is just to mention.

I have authored three books: Jangi Jollof: A Memoire on the Gambia’s First University Programme. Instant Success: Ten Keys to Personal Achievement, and Secrets of the World Champions. And this has opened further windows of opportunity, including, being featured on the BBC!

My plans include the writing of more books of the Self-help genre to motivate young people toward self-fulfilment and effective contribution towards the welfare of their societies and nations. Toward this end, I am currently working on publishing my fourth book “The Pursuit of Blissdom and Other Inspirational Essays” due to be released later this year and a series of motivational booklets designed to suit the needs of young people.

The foregoing is just a synopsis of what the July 22nd revolution’s opportunities have led me to. And as far as I am concerned, the Presidnet’s mantra has come to fruition/reality: Sky’s the Limit!

Now here are a few keys to use to prepare yourselves for the harnessing of the great opportunities created by the July 22nd Revolution; the following are two of the Ten Keys to Personal Achievement expounded in my recently published book, Instant Success:

Personal initiative is one of the keys to success. In his trail-blazing work Law of Success Napoleon Hill defines initiative as that exceedingly rare quality which impels a person to do what ought to be done without being told to do it.  You have to be able to have faith in your ideas and go ahead to implement these ideas with persistence. Whole industries have been established for the benefit of mankind by using this key to success.

Do not be crippled by the fear of failure or the lack of resources to implement your ideas. Just have faith, use your imagination and go out there and try. Do not just try but keep on keeping on. Yes, personal initiative is very important for success. You must build up the courage to act on your own without having to wait for others to prod you.

Closer home and in the very same industry that bill gates rose so high above like a mighty star, we have muhammed Jah of Quantumnet/Qcel and Papa Njie of Unique Solutions. Nobody told these two Gambians to start the companies that they so successfully run. It was their own personal initiative that led them to where they are now. And I have heard Muhammed Jah say on TV that he is a product of the July 22nd Revolution. So truly, this revolution has truly created opportunities for self-fulfilment for young Gambians!

And Government is now investing in a multi-million dollar ICT project: the Africa Coast to Europe (ACE) that will bring in a major transformation of out telecommunications sector by multiplying our bandwidth a thousand fold, thereby creating even greater opportunities for young Gambians in this information age.

Take heart if you feel intimidated by the jeers of the doubting Thomases. Be inspired by these poetic verses written by Edgar A. Guest:

The things that haven’t been done before

Are the tasks worthwhile to-day

Are you one of the flock that follows, or

Are you one that shall lead the way?

Are you one of the timid souls that quail

At the jeers of a doubting crew,

Or dare you, whether you win or fail,

Strike out for a goal that’s new?

To the words of Edgar A. Guest you should now add, you who desire to go beyond the established trends, the great wisdom of Abraham Lincoln: Towering genius disdains a beaten path. It seeks regions hitherto unexplored. Be bold and be a self-starter; do not wait to be told what to do. Search for the opportunities that are forever abundant in your world. This is a fine country (The Gambia) for the young man or woman who knows what he or she truly wants and is willing to pay the price to get it!

It was the great W.H Murray who wrote:

Until one is committed, there is hesitancy, the chance to draw back, always ineffectiveness. Concerning all acts of initiative (and creation) there is one elementary truth, the ignorance of which kills countless ideas and splendid plans: that the moment one definitely commits oneself, then providence moves too. All sorts of things occur to help one that would never otherwise have occurred. A whole stream of events issues from the decision raising in one’s favour, all manner of unseen incidents and meetings and material assistance which no man could have dreamed would have come his way.

Faith is the cornerstone of achievement in any field. Anyone who wants to succeed in anything must first believe that she CAN indeed succeed. Napoleon Hill listed faith as one of the seventeen principles of success he gleaned from more than two decades of research.

The Under Seventeen (the Baby Scorpions) have demonstrated to me the importance of FAITH mixed with other success principles. And let me hasten to remind you also that the great achievements this country has registered in the sports sector were also ushered in by the July 22nd revolution. And this one is even more interesting because i do remember that it was the international football tournament commemorating the July 22nd revolution that helped us win our first ever football trophy and then this was replicated when we hosted the CAF Under 17 tournament.

Let us look at what the Baby Scorpions achieved by using one key to self-fulfilment and what you and I can learn from it.

The Baby Scorpions have had no mighty record to be proud of in soccer, and representing one of Africa’s smallest countries by size, population and resources is no remedy for that. But in spite of these odds this little known team played in Africa’s Continental cadet tournament and won the championship trophy in 2005. They did it because they had FAITH that they could do it.

How did they do it? From my observation of their games, most of which I watched live, these boys have:

- FAITH in God and in their talents and abilities

- a clear goal, which is victory.

No wonder their results have been astonishing. In addition to being the African champions, they earned the ticket to perform on the world soccer stage during FIFA’s Under Seventeen World Cup soccer tournament held in Peru in 2005 where they recorded yet another major achievement. This is how the official website of the Colorado Rapids Major League Soccer Team reported it:

“The tiny African nation of Gambia produced a major upset Saturday, defeating defending champion Brazil 3-1 on the second day of the Under-17 World Cup.”

Since then we have had even greater achievements in soccer and this has led the President to make millionaires of the boys who have made us proud in this field! Opportunity is knocking on your door right now! Will you open it?

Now let’s get it: you and I can make similar achievements in life if we play our game of life like the Baby Scorpions did; if you already consider yourself successful, you would be able to maintain that success and climb to higher heights if you:

- Back up your goals with FAITH; the adrenaline of faith will generate in you a fresh powerhouse of confidence. Ralph Waldo Emerson was quoted as saying that the first secret of success is self-trust. Anyone who has achieved an admirable level of success has had SELF-CONFIDENCE

- Create a definite plan to achieve the stated goals.

- Work that plan with PERSISTENCE.

We must be willing to change our attitudes to embrace the opportunities ushered in by the July 22nd Revolution. We must work and pay the price to achieve our goals without breaking the laws of God and man. As the Holy Qu’ran teaches: Man can have nothing but what he strives for. And in words of the Holy Bible: if thou canst believe, all things are possible to him that believeth. 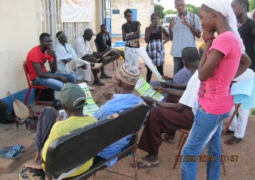 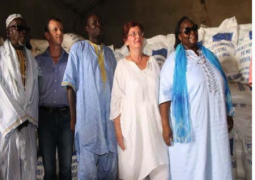