Both teams came into the game with the soul aim of securing the maximum points and therefore put up a respectable performance.

But it only took Uprising FC 10 minutes to break the deadlock thanks to Sainey Gibba’s fine strike.

The encounter played at the Serrekunda East Mini Stadium at 5pm, saw Maccasa FC fought back and nearly levelled proceedings through Musa Tamba in the 25th minute but his header failed to hit the target.

Omar Saho of Maccasa FC missed a penalty for his side in the 30th minute of the game when Alpha Jatta was brought down inside the area thus the match ended 1-nil in favour of Uprising FC.

In the 3pm kickoff of the same day, Hannover FC drew 1-all with Leeds United.

Paul Jatta gave Leeds United the lead in the 67th minute but Hannover FC soon after launched pressure on Leeds United resulting in substitute Baboucarr Jobe levelling the scores for his side in the 74th minute of the game.

Modou Nyane and Pa Babou Choi were on target for Jokko FC in the 37th and 47th minutes respectively while Sainey Jammeh registered Jinack Kajata’s consolation goal in the 49th minute of the encounter. 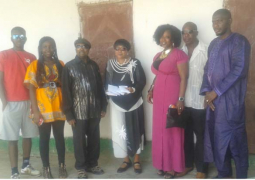