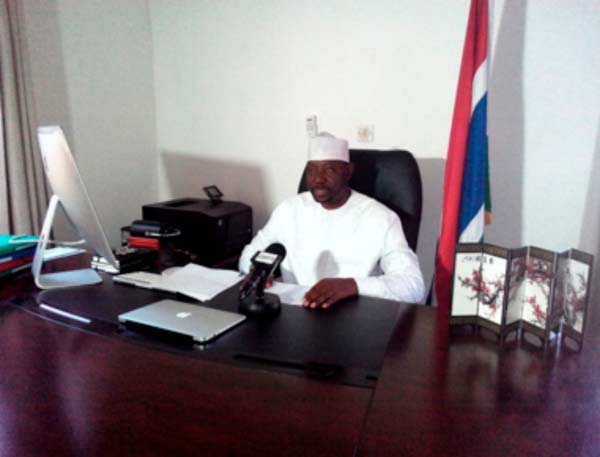 Frankly, this campaign by some politically aroused individuals to paint Mai Fatty in the worst of colours frightens the broad daylight out of me. In recent days, I’ve seen all sorts of wretched falsehood and shameless fabrication being propelled in the sinister plot to tarnish the public standing of the frontline minister. It’s reckless. It’s pernicious. It’s dangerous.

First there was Dr Lamine Conteh. This guy calls himself a fraud examiner and an accounting professor. And last week, he took to social media accusing Mai Fatty of purchasing a house for 10 million dalasis using public funds. What is saddening is his allegation has since lacked merit as he is yet to find a proof. Little surprise he is now left utterly diminished.

Then the write-up, ‘In Defense of Dr. Lamin Conteh: Mai Must Explain or be Fired’, written by some anonymous person. In the write-up, the author held that Lamine Conteh was asking ‘very relevant questions’ and went ahead to give 10 reasons why the Professor was right. The author made allegations that Mai Fatty is a corrupt person who has no profession or business yet lives a flamboyant lifestyle.

There’s something suspect about this person and his/her write-up. The single count that he or she didn’t give his/her name shows he or she is some dishonest pipsqueak who is just trying to hoodwink undiscerning Gambians and sell the garbage that Mai Fatty is not upright. If there is any iota of truth in the allegations this crassly-informed hater has made against Mai, he wouldn’t have gone anonymous.

Now, truth to be told, the objective of this hateful onslaught against Mai Fatty is beyond me. I’ve known Mai Fatty for the past years and now spend a lot of time in his company, professionally. This has given me a rare insight into the type of man he is.

Well-meaning Gambians will be surprised that almost all the allegations being bandied about Mai Fatty are either concocted, unsubstantiated, pure conjectures or outright falsehood. Yet, they are frivolous, malicious and lack credibility.  The guy is – at best - being maligned by these people for reasons that I know are far from being noble. What’s more, these evil-intentioned elements want to ultimately undermine President Barrow and his team’s plans to put the country on the path of prosperity.

I do not want to be too patronizing but Mai Fatty is one of the finest leaders of our time. When I spoke to him shortly after his appointment as Interior Minister, he told me how passionate he was about faithfully serving the nation. I remember him telling me in him President Adama Barrow has found a loyal and dependable servant. His resourcefulness to play by the rules for the delivery of the needed dividends of democracy is obvious. President Barrow knows this too well.

Yet, this much vilification of Mai Fatty is as suspect and it is faulty. Yet, the fact that there’s no evidence of Mai being a corrupt person is some good enough reason for every good Gambia to know the man is being unjustly targeted for daring to serve our common interest to the best of his ability. And it would now amount to being unpatriotic to keep mute, while this innocent man is being pilloried for selfish reasons.

Meanwhile, what is mind-boggling is how these self-appointed headmasters of our young democracy expect Gambians to be so easily deceived. It’s true that a lie gets halfway around the world before the truth has a chance to get its pants on but Gambians are now a smart people who cannot fall for the dirty tricks of these individuals who think that they can use bogey schemes to cause chaos in our public life, just to serve their nefarious interests.

President Barrow must continue to identify with Gambian men and women whose hallmarks are integrity, hardwork and patriotism. Our country needs men and women of character with high level mental alertness to develop.

The author, Lamin Njie, wrote from Serrekunda. He can be emailed at njiel@ymail.com

Falcons FC sail to next stage in East Nawetan