The trial of Taranga FM MD has reached a stage where it will be decided whether it should be transferred from the lower to the high court.

The court granted the adjournment so that it could be communicated to on whether the case should be transferred from the lower to the High Court in Banjul.

The development followed police prosecutor Inspector Manga’s application for the case to be transferred to the high court in Banjul, since there is an indictment filed before the high court.

When the case was called, Inspector Manga told the court that the prosecution was applying for the case to be discontinued in the lower court, and subsequently transferred to the high court in Banjul.

The reason was that the office of the Director of Public Prosecutions (DPP) had communicated to their office to transfer the matter to the high court, since they have filed a fresh indictment against the accused person on the same matter, he said.

The prosecution, therefore, urged the court to grant the application for the case to be transferred to the high court in Banjul.

In response, the defence counsel, Combeh Gaye-Coker, said the prosecution had already admitted that the same count could not proceed in two different courts.

“I entirely agree with the prosecution, because that’s abuse of process to admit the same charge in two different courts,” counsel said.

“I am speaking from the Bar. The office of the Director of Public Prosecutions has already filed fresh information against the accused person at the high court relating to the same charge before this court, and this was done since 11 August 2015.”

“I, therefore, urge the court to strike out the matter and discharge the accused person as far as this matter is concerned,” counsel told the court.

Delivering his ruling, the trial magistrate told the court that he had listened to the submission of both sides on the matter, for the case to be transferred to the high court in Banjul.

He said the defence had applied for the matter to be withdrawn from the lower court and transferred to the high court.

However, he added, the court had not received any information or notice relating to fresh indictment at the high court.

He said the court would grant a fortnight adjournment for the office of the DPP to apply to withdraw the matter from the lower court and transfer it to the high court.

He then adjourned the case until 1 September 2015.

The prosecutors alleged that the accused, Alagie Abdoulie Ceesay, on 16 July 2015 in Banjul and diverse places in The Gambia, distributed pictures of President Yahya Jammeh, to one Zainab Koneh and Fatou A. Drammeh, through Africell mobile SIM card showing a gun pointed at the President, with the intention to raise discontent, hatred or disaffection among the inhabitants of The Gambia, and thereby committed an offence. 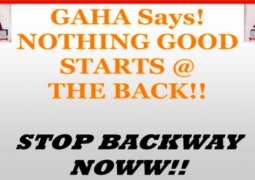