The government of the Republic of China on Taiwan through its embassy in Banjul on Wednesday June 17th donated (660) six hundred and sixty metric tones of fertilisers to the government of The Gambia.

Yesterday's delivery brought the total to 1260 metric tones of fertilisers being donated to the Gambia by ROC for the coming farming season. The 40-kilogram fertiliser was packed in 33 containers totalling 31,500 bags.

Speaking at the handing over ceremony held at the Gambia Groundnut Corporation (GGC) deport in Banjul, Bakary Trawalleh Permanent Secretary at the Ministry of Agriculture, thanked the government of Taiwan for the assistance.

According to him, the donation was part of the basic inputs of the rice expansion initiative, which also seeks to provide rice seed, land preparation, protection and variety.

He described "Taiwan as a very sincere partner and a progressive country".

The initiative, he said, is part of President Jammeh's efforts towards attaining vision 2020.

When asked by journalists whether the fertilisers would be given to farmers at no cost, PS Trawalleh answered in the negative. But, he was quick to add that it will be given at an affordable and reasonable price.

He stressed that the era of free giving is gone, adding that "people need to invest in their own development no matter how small it may be".

For his part, Mr. Herman T.C Chiu, the Deputy Taiwanese Ambassador revealed that the project will run from 2009 to 2012 and will be jointly implemented by the Ministry of Agriculture and Taiwanese Technical Mission.

According to him, the initiative aims at expediting the process of enhancing rice self-sufficiency through increasing both unit yield and cultivation area, thereby increasing rural income, saving foreign exchange, as well as consolidating food security.

"Under Irrigation Development Project", he revealed, "within the period of a minimum of 1600 hectares will be developed for rice cultivation".

Mr. Herman disclosed that a total area of 32,000 hectares of upland had been appraised and registered for converting its cropping from non-rice to rice.

He concluded by saying that 79 villages in five regions of the country would participate in the project. 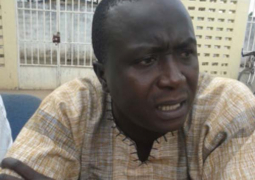