The government of the Republic of China (Taiwan) on Friday August 23 donated three high-speed boats to The Gambia.

Receiving the boats on behalf of President Yahya Jammeh from Taiwanese ambassador Samuel Chen was the Vice President, Isatou Njie Saidy, who described the donation as “fitting and timely for obvious reasons”.

According to her, the assistance will enhance the capacity of the Gambia armed forces in meeting their constitutional mandate of maintaining peace and stability.

It would also help in the ongoing efforts in capacity building, infrastructure development and agricultural activities within the defence sector, and would also strengthen maritime security.

“As a country, we will continue to ensure that our territorial waters are well-protected , together with our marine resources, and address banditry at sea as well as deter or punish the criminals,” she said.

Vice President Njie Saidy added that the boats donated by Taiwan will be pivotal in strengthening surveillance of our marine resources, particularly combating poaching, illegal, unregulated and unreported fishing activities.

She also thanked the visiting Taiwanese team of experts for providing training for the naval crew on how to use and maintain the boats.

She advised the Gambia navy to take good care of the donated boats, while stressing that recklessness of any sort, that might cause damage, will not be condoned.

Speaking earlier, ambassador Chen expressed his pleasure in handing over the boats to The Gambia on behalf of his government.

According to him, security is the highest priority for any government to develop national stability and her people’s welfare.

“Defending the territorial integrity of The Gambia and creating a stable and viable economic environment promotes national development and economic growth,” he remarked.

Taiwan, he said, has proven to the world that it is a peacemaker, and would not push any country into trouble.

He recalled that in 2009, the ROC donated four patrol vessels to assist the Gambia Navy in their efforts to promote maritime security.

This year, he said, they are pleased to provide three more boats, and sent four instructors to train Gambia Navy crew.

In his address, Comodore Madani Senghore, Commander Gambia Navy, said that the high-speed boats arrived at a time when maritime safety and security issues have been propelled to the top of the regional security agenda, due to the evolving transnational threats to marine security that pose a great challenge to regional peace and stability.

“These threats such as piracy, narcotic drugs trafficking, illegal fishing, human trafficking and smuggling of goods in the maritime environment continues to affect the security and stability of the sub-region,” he said.

According to him, the boats donated by Taiwan are fitted with twin 115 horse-power outboard motors that have an endurance of 2 hours at full throttle and capable of speeds of up to 80km per hour.

“The nature and design of the boats would also enable us to conduct search and rescue operations in narrow channels and shallow waters,” he said.

The handing over ceremony was held at the Gambia Ports Authority wharf in Banjul and was graced by the speaker of the National Assembly, cabinet ministers and other senior government officials. 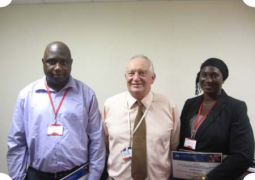