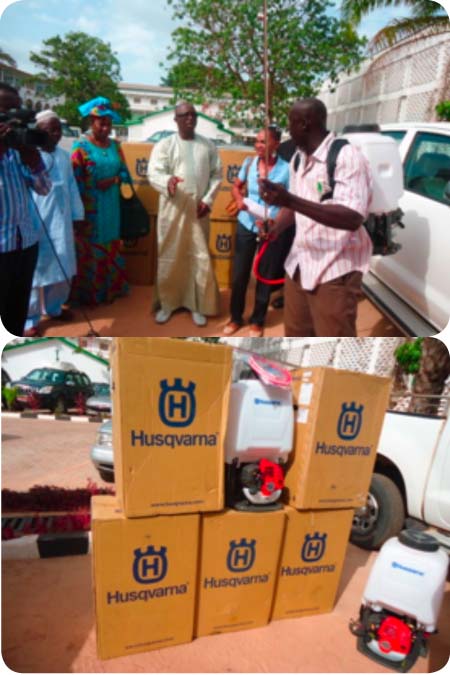 The five chemical spraying machines cost D160,000 and have petrol driven engines, and a pump unit with a holding capacity of 25 litres.

Speaking at the presentation ceremony on behalf of Swe-Gam’s Managing Director Ebrima Cole, the marketing officer of Swe-Gam, Ms Mariama Jallow-Hydara, said the world is faced with the worst Ebola outbreak in history, and Swe-Gam Limited decided to engage their long-term partner in business, Husqvarna AB Sweden, to assist The Gambia.

A similar gesture was extended by Husqvarna AB to all countries in West Africa, she added.

The need to prevent the disease made the Gambian company to partner with Husqvarna AB of Sweden and donate the equipment to the Ministry of Health and Social Welfare.

It is their contribution to enhancing the government’s efforts in the global fight against the spread of the Ebola virus disease and to maintain an Ebola-free Gambia, she went on.

The spraying machines are powered by petrol, and have been proven to be very efficient, easy to use and could prevent both Ebola and other diseases from spreading.

Swe-Gam Gambia has been a long-term partner in development with the Gambia government, in making a series of similar donations, in the past, to some of the line ministries, particularly health and the interior.

Swe-Gam would continue to register its support and commitment to complement the government’s efforts in addressing its development agenda, she continued.

The Swe-Gam marketing manager expressed gratitude to Husqvarna AB Sweden for the quick response to the company’s request for the donated items.

“The donation is a reflection of your goodwill and humanitarian service to West African people, and also to society at large,” she said.

She also thanked the Gambia government on behalf of the managing director and staff of Swe-Gam for creating the enabling environment to make their support possible.

In receiving the items, the Minister of Health, Dr. Omar Sey, expressed gratitude to Swe-Gam Gambia.

“This is not the first of their gesture,” Minister Sey announced, adding that in some areas in this country, especially the hard to reach areas like Kiang-Karantaba, Chamen Nianija, Kaur and some other parts upcountry, their entire water supply problems are being solved by Swe-Gam.

The Health minister described the donation as “very big” to the Gambian people, as it works to prevent the Ebola virus from coming into the country.

He assured the donors that they would ensure they follow the instruction given them, and put the items to good use.

The country does not have Ebola, but the donated items will contribute to maintaining an Ebola-free Gambia, he said.

Minister Sey added that the donation came at the right time, and thanked the donors on behalf of the Gambian leader and people.