The criminal trial of Lamin B. Jarju, the supposed alkalo of village, and one Bakary Hena Badjie commenced yesterday at the Brikama Magistrates' Court before Magistrate Babucarr Secka.

Lamin B. Jarju and Bakary Hena Badjie are standing trial on charges of committing a misdemeanor, giving false information and making false document.

Testifying as the first prosecution witness, CPL 388 Malang Manneh, a detective police officer attached to the Brikama Police Station, told the court that he recognized the accused persons.

According to him, there was a petition written by Bakary Hena Badjie to the Office of the President, claiming injustice was done to Lamin Jarju of Babylon village.

He said a request was sent from the Office of the President to the IGP's office to set up a panel to investigate the matter, and he was part of the panel that comprised six officers.

At that juncture, the police prosecutor, Inspector Kebba Fadera, applied to tender the copy of the petition, which was admitted for identification purposes.

The witness added that after the investigation, a report was prepared to that effect.

He also identified the investigating report, and told the court that it was the original report.

The prosecutor applied to tender the report as an exhibit, but this was objected to by the accused persons.

The presiding magistrate told the court that he would adjourned the case since the defence counsel, Borry Touray, was absent.

He added that if on the next adjourned date the defence counsel was absent, the court would proceed with the matter as the court cannot wait for counsel.

The case was subsequently adjourned till 13th April 2011. 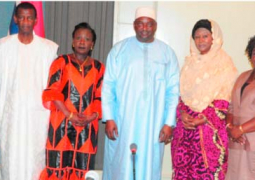