Super Santos FC have sailed to the 2012 Badinya Sports Committee (BSC) Intermediate Tournament final after beating Barcelona FC 1-0 in the semifinalgame played at the Gunjur Upper Basic School football field at the weekend.

Both sides launched serious assaults in front of each other’s goal mouth but they failed to capitalize on their limited goal-scoring opportunities and thus first period ended goalless.

Upon resumption of the game, both sides brought in several fresh legs in order to boost their attacking force but it was Super Santos FC whose substitutions paid dividends.

When striker Edu Jatta netted the opener in the stoppage time from a brilliant header, eventually proved to be the winner for Super Santos FC and also earned them a place in the final.

Young Solifo FC also booked their ticket to the final after defeating Black Panthers FC on the same score-line courtesy of Saikou Touray’s strike in the 64th minute.

Super Santos FC will now meet Young Solifo FC in the final to be announced later. 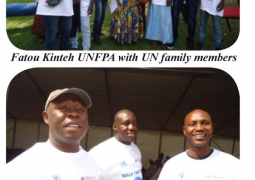