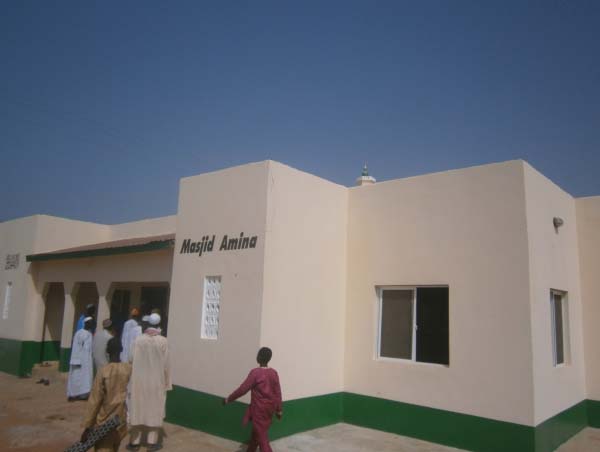 The inauguration of the mosque, called Masjid Amina, was attended by thousands of Muslims including officials like the permanent secretary of Ministry of Basic Education, Paramount Chief of The Gambia, National Assembly Member for Kombo North, several Imams and Alkalolou as well as a cross-section of youth.

The construction of the mosque is funded by Fhierman family through Khadija Foundation, a Muslim charitable foundation based in London, the UK.

Fhierman family is the founder and trustee of the foundation.

The construction of the mosque was made possible through the contact of Master Muhammed S. Jabbi, principal of Brufut Upper Basic School who is also the secretary general of Sukuta–Medina Development Association.

In his inaugural sermon, Imami Beyai told believers that the new Mosque like other mosques is geared towards encouraging Muslims to worship the Almighty Allah.

He commended the sponsors of the new mosque while urging people to be steadfast in their five daily prayers as “that is the passport of Muslim to Jannah [paradise]”.

Imam Beyai also commended Master Jabbi for bringing the project to Madinary, saying the he had known master a long time ago for his honesty and mercifulness.

Imam Beyai said Master Jabbi is not only for the people of Sukuta, where he is a native, but for the entire Gambia, for he had been supporting other villages through his contacts.

“We are praying for long life and good health to Master Jabbi and his family so that he can continue to better help humanity,” he said.

The Alkalo of Madinary village said the construction of the mosque is a great development to the village.

He also commended Master Jabbi for leaving all the way from Sukuta to ensure that Madinary also has a mosque.

Master Muhammed S. Jabbi, himself, described the inauguration of the new mosque as a joyous day for him while thanking Allah for seeing the project through successfully.

Master Jabbi, who is the principal of Brufut Upper Basic School and secretary general of Sukuta Medina Development Association, thanked the Alkalo of Madinary and his council of elders for their effective participation in the construction of the mosque.

He urged the community of Madinary to take ownership of the mosque as the donors have more plans for the village such as building a health facility and a school to provide free healthcare services and education to the village.